The President said he had decided to start travelling by visiting Uttar Pradesh first because his roots are here. 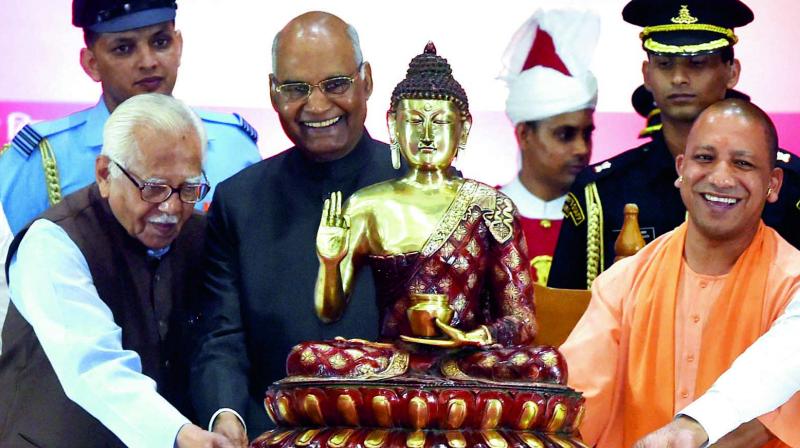 President Ram Nath Kovind being presented a statue of Lord Buddha by UP Governor Ram Naik and CM Yogi Adityanath during a civic reception in Lucknow on Thursday. (Photo: PTI)

Lucknow: His first visit to Uttar Pradesh after assuming the highest office in the country, President Ram Nath Kovind showed a new aspect of his personality and won many hearts.

At his civic reception in Lucknow, the President began his speech by offering condolences to the families of those who died in a boat accident earlier in the day in Baghpat district. “As I was entering the auditorium, I had mixed feelings because I knew you all were waiting for me but my heart was heavy because of this tragedy. Let us pray that the families may have the strength to bear the loss and the souls may rest in peace,” he said.

The President said he had decided to start travelling by visiting Uttar Pradesh first because his roots are here. “There are many in this hall with whom I have worked and also have fond memories. I never imagined that I would hold this post but it
is the beauty of  democracy.”