India   All India  15 Aug 2021  Parliament is temple of indian democracy: the president
India, All India

Parliament is temple of indian democracy: the president

On the 75th Independence Day, the President referred to the second wave, and said the country is yet to come out of its devastating effects 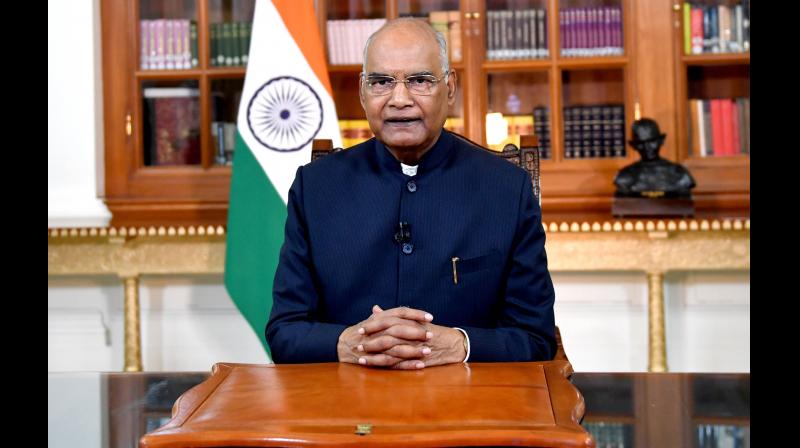 President Kovind also sought to address the concerns raised by protesting farmers' unions against the three contentious farm laws, saying the series of agricultural marketing reforms will empower our annadata' farmers and help them get better price for their produce. (Twitter)

New Delhi: President Ram Nath Kovind on Saturday said Parliament is the “temple of the country's democracy” which provides the highest forum to discuss, debate and decide issues for the well-being of people, remarks that came against the backdrop of the continuous disruptions that led to the abrupt curtailment of the tumultuous Monsoon session.

In a televised address to the nation on the eve of the 75th Independence Day, the President also referred to the second Covid-19 wave, and said the country is yet to come out of its devastating effects. He asserted this is the time for extra care and caution, and people should not let their guard down.

President Kovind also sought to address the concerns raised by protesting farmers' unions against the three contentious farm laws, saying the series of agricultural marketing reforms will empower our annadata' farmers and help them get better price for their produce.

Referring to the recently concluded Tokyo Olympics, he lauded the “stellar” performance by the country's sportspersons.

President Kovind said when India won independence, many sceptics thought democracy would not survive in India. Little did they know that roots of democracy were nurtured in this soil in ancient times, and even in modern times India was ahead of many western nations in offering franchise to all adults, regardless of any distinctions.”

The founding fathers had reposed their faith in the wisdom of the people, and we, the people of India' have made India a strong democracy, he added.
We have adopted the system of parliamentary democracy. Therefore, our Parliament is the temple of our democracy which provides us highest forum where we discuss, debate and decide issues for the well-being of our people, the President said.

Both the Lok Sabha and the Rajya Sabha were adjourned sine die on    August 11, two days ahead of the scheduled date of August 13, after a stormy Monsoon session that witnessed unruly scenes in the Upper House on Wednesday when the Insurance bill was being passed.

The Government and the opposition parties had traded charges over the early close to the session which was marred by continuous disruptions since it commenced on July 19.

Kovind also said it is a matter of great pride for all Indians that the country's Parliament will soon be housed in a new building.

“It will be a fitting statement of our outlook. It will honour our legacy while also walking in step with the contemporary world, he said, adding that it is more than symbolic that the new building will be inaugurated in the year of the 75th anniversary of Independence.”

The President also said that India must strive for more equality in an unequal world, more justice in unjust circumstances, adding, Justice has come to encompass a larger range of connotations, including economic and environmental justice. “The road ahead is not easy.

He said the country has to negotiate many twists and turns, but it has the benefit of incomparable guidance.

It comes to us from diverse sources, from the venerable seers of millennia ago, down to the sages and leaders of more recent times. In the spirit of 'unity in diversity', we as a nation are following the right course.”

The President noted that the country has suffered from a terrible second COVID wave due to the new variants and other unexpected factors.

I am deeply sad that many lives could not be saved and many more suffered immensely in this phase of an unprecedented crisis. I speak for the whole nation when I say that I share the grief of all the affected families with the same intensity, he added.

We can take solace from the fact that more lives have been saved than the lives lost. It was our collective determination to overcome the challenge that helped us see the weakening of the second wave. Once again, our corona warriors, the doctors, nurses and health workers, the administrators, and others, risked everything to contain the impact of the second wave.”

The reality is that no infrastructure, even of advanced economies, could withstand a crisis of such enormous proportions, he added.

Efforts were made on war-footing to plug the gaps. The leadership    rose to the challenge, and the government's endeavours were supplemented by initiatives of the states, private sector healthcare    facilities, the civil society and others, he said.

In this extraordinary mission, foreign nations shared the essentials generously, just as India had reached out to many nations with medicine, equipment and vaccines, he said.