Dancing inside the auditorium has been as common as dancing in a museum amidst artifacts, on the street, on a catwalk or on the Wall of China. 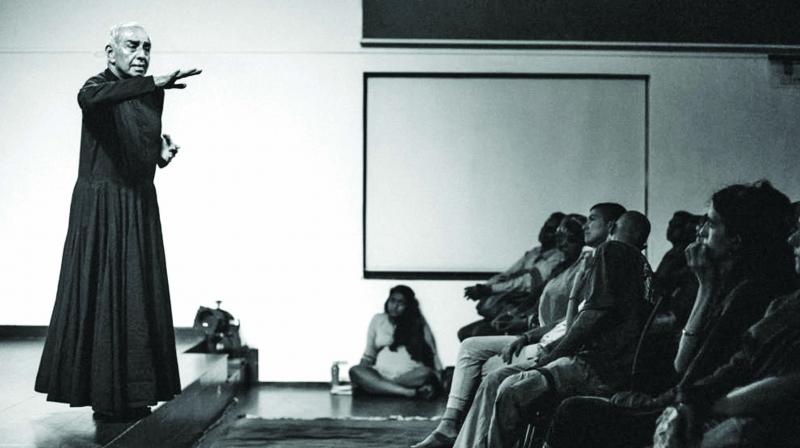 A dancer on his own creative journey, away from established dance norms, Astad Deboo understandably ploughs a lone furrow.

A dancer on his own creative journey, away from established dance norms, Astad Deboo understandably ploughs a lone furrow. Is it absence of curiosity and thinking in Indian dance writing that keeps this artiste with over five decades of working with the body, still an enigma? The question was posed by Sadanand Menon, at a special evening arranged at the Max Mueller Bhavan in Chennai, when the screening of excerpts from Astad’s productions was followed by the dancer answering points raised by Sadanand and Padmini Chettoor. Sadanand summed up Astad’s eclectic career — training in classical forms like Kathak and Kathakali with its strong mukhabhinaya, his training in the Martha Graham technique and the Jose Limon technique, his working with Pina Bausch, his love for using Southeast Asian hand movements in his movement visualisation — to mention a few. Sadanand wondered about the in-between stages in this “interesting” mix of various movement disciplines. What the Indian classical dancer with all his masterly technique was not ready to do, Astad with his “assemblage” did — “landing a punch in the face of the audience”. Mangalore Street saw his satirical sense of humour mixed with derring-do — jumping from the stage straight into Jamshed Baba’s lap in the audience! In Chewing Gum, his body wrapped in a stretchable textile became like dough kneaded into any shape. Once in the Khajuraho festival, in Ladki Ka Ravan, he arrived with the sound of sirens, a black cat and all, in an Ambassador car onto the stage. Astad has the same eclectic taste in music and is as fond of classical Dhrupad, as of Western classical, of popular music, of rap. Having travelled to all parts of the world, for the Western dance entrepreneur, his vocabulary of mixed classical and Western was not “authentic modern”. The Indian impresario likewise was unsure about where to place him. Was his art a continuum or alternate way of presenting the classical?

Modern dance in the West being all about body movement, facial expressions telling the tale (considered too sentimental) have little place in the scheme of things. But in Astad’s art, wearing the heart on the face is not taboo and some of his work makes full use of the Kathakali-like mapping of strong mukhabhinaya. Modern dance discards the narrative form of treatment, which Astad uses quite often. He has also used myth, though very rarely, as in his production of Thanatomorphia. A non-classical contemporary dancer consciously opting for in-between choices obviously has his convictions, despite predicaments — which critics have not tried to decipher.

Astad has used performance spaces of every possible variety. Dancing inside the auditorium has been as common as dancing in a museum amidst artifacts, on the street, on a catwalk or on the Wall of China. Dancing with two syringes sticking out of his hand, landing in the middle of hundreds of burning candles, trying to wriggle his body through the spaces in between two strands of a ladder are only some of the painful actions he has subjected his body to. Mind and body are both tortured in Insomnia (1982) and in Asylum (1979). Why this self-flagellation? Is it a constant challenge he wants the body to overcome, or something more compulsive?

From solo dancing, Astad moved on to collaborations — working with some musicians, like the Gundecha Brothers performing with the dancer responding through body movement. He has also worked with the Rudra Veena Dhrupad musician Bahauddin Dagar. Tanatomorphia (title inspired by the Greek God of Death) with puppeteer Dadi Padamjee is an interaction with Death represented here as a puppet, manipulated by Dadi. “I have always been fascinated by the subject of death, Is death a liberation, or a celebration? I brought in references to the Indian counterpart Yama, mistaken for Krishna, in a playful interplay with Radha and Yashoda. I rarely use myth, though sometimes these references help in communicating a point.”

Dadi is the creator of the outsize Kali puppets in Astad’s work — which toured countries like Mexico and Spain, and also Cervantino and was very well received.

From solo to collaborations and now group — how have Astad’s shifts impacted the dance? Not one for collaborations, Sadanand Menon with Padmini wanted to understand the exercise of working with the Thang Ta and Pung artists of Manipur, perhaps the most insular part of India, with non-Manipuris seldom intruding this very culture-specific regional space. Astad talks of how he was drawn to Thang Ta instead of the oft-used Kalaripayattu, which most dancers opt for as the martial arts form. Finally, he managed to secure the permission of Devaprasad Sinha, the Thang Ta Guru, to work with his disciples — the assurance being not to interfere with their traditional movement technique. “The challenge was that they were not actually dancers and when divested of their security blanket of sword, shield, stick, or whatever protective device they carried, they could not move. So I began with floor movements and taught them to move in a crawl. The Guru had no objections though some viewers objected about Thang Ta specialists being made to do these crawling movements. My argument was that they had no weapons and this movement vocabulary had little to do with the tradition they represented. Working with them in fits and starts till 2004, when with Zee TV’s commissioning a work, I created a production with artistes like Louis Bank and Shiva Mani and 12 Thang Ta practitioners — my collaboration with these artists becoming a significant part of my productions. So also with Pung Cholom artists, my “Rhythm Divine” has been widely appreciated.

Astad Deboo’s work with the deaf (invited to work with the largest university for the deaf in the United States, and the Deaf Olympics in Spain had his work as a curtain raiser in the inauguration), his significant work with the underprivileged and street children with a mega “Breaking Boundaries” produced for Salaam Balak Trust is a side of this artiste which shows the largeness of heart — in wanting to share his knowledge from working with the body for years. Pankaj Gupta, one of his students, is working for the Kingdom of Dreams.

Astad himself never talks about his work for society. The confidence and assurance in the young students of Salam Balak and their love for him are a life testimony.

While asking about the critique of the human body, the idealised or the humanised body, the political philosophy driving his work and if the work speaks to power structures — whether it is only extravaganza or has something to say, Sadanand sums up, “I would like him to give up all work and concentrate on training bodies. Nothing could be better.” A very incisive statement considering that Astad himself, now in his 70s, still moves with an incredible balance and agility.

Astad sums up, “Of course, I have thought behind my work. My dislike for violence, for loss of freedom are all there — but not in a screaming fashion. My home Mumbai has done little for me. But I have my very helpful thinktank — Satyadev Dubey, Sunil Shanbag, Suhel and M.K. Raina and others. Max Mueller Bhawan has helped me always.”

Life has not been easy for this dancer. But with a Padma Shree, the Sangeet Natak Akademi award and other recognitions, Astad knows that the hard work has been recognised.