India   All India  15 Aug 2019  One nation, one Constitution spirit has become a reality: PM in I-Day speech
India, All India

One nation, one Constitution spirit has become a reality: PM in I-Day speech

He said if 2014-19 was an era to fulfil people's needs, the time since 2019 is about meeting aspirations and dreams. 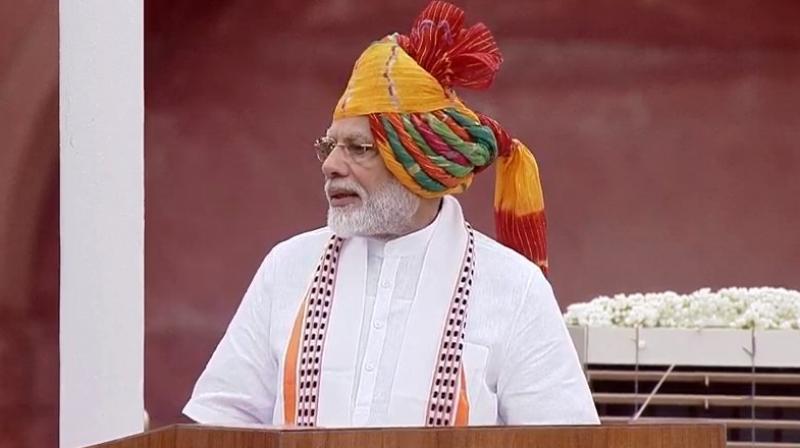 New Delhi: Prime Minister Narendra Modi on Thursday asserted that his government neither nurses problems nor keeps them pending and referred to the scrapping of special status to Jammu and Kashmir, saying India now is one nation with one Constitution.

Addressing the nation from the ramparts of the Red Fort here on the 73rd Independence Day, he said that within 10 weeks of assuming power, his government has taken key decisions such as bringing a new law to ban the practice of instant triple talaq and scrapping provisions of Article 370 related to Jammu and Kashmir.

"Our government does not delay decisions. We neither nurse problems nor keep them pending," he said while referring to Article 370. Previous governments made efforts in the past 70 years to deal with Kashmir, but it did not bear results, he said, adding "a new approach was needed".

He said that every effort being made to remove corruption and black money was welcome and added these are "menaces" that have ruined India for 70 years. Advocating the principle of minimum government and maximum governance, the PM said that the government should have minimal role in people's lives.

"Let our people have the freedom of pursuing their own aspirations, let the right eco-system be made in this regard," he said. Referring to the issue of "population explosion", Modi said that it led to many difficulties. "We have to be concerned about population explosion. The Centre as well as state governments should launch schemes to tackle it," he said.

He said his government has dedicated itself on all fronts in the service of countrymen. "The spirit of one nation, one constitution has become a reality now. And India is proud of it," he said. He also referred to the introduction of GST, saying it has given life to the dream of one nation, one tax. India has also achieved one nation, one power grid in the energy sector and arrangements have been made for one nation, one mobility card.

"Today, India is talking about one nation, one election. It is good that such a discussion is taking place," he said referring to holding of simultaneous elections to Lok Sabha and state assemblies. Stating that the aim of his government was to reach among first 50 nations in ease of doing business and for that global best practices have to be kept in mind. "India does not want to wait too long for incremental progress. A high jump is needed, our thought process has to be expanded," he said, adding a decision has been taken to invest Rs 100 lakh crore in infrastructure building.

Modi also condoled the death of people in recent floods and assured the affected of all help. He said if 2014-19 was an era to fulfil people's needs, the time since 2019 is about meeting aspirations and dreams.

"People's trust in us has given us new strength. The 2019 mandate shows that hopelessness has given way to hope among masses," he said. He said, "In the last five years, we tried to improve ease of living. We will work harder in the next five years."

"Scrapping of instant triple talaq will help Muslim women live a better life. The decision should not be seen through a political prism...if we can take steps against 'Sati' custom, female foeticide and dowry, then why not against instant triple talaq," he asked.

He said people should visit Indian destinations even if there were no hotels or infrastructure there, as their visits would boost tourism in these areas and automatically lead to better facilities. He also said that earlier people aspired to have a good mobile phone, but now they want more data and better speed.

"There is a huge scope to improve our tourism sector," he said. He said the time has come to boost exports and each district of India has much to offer. "Let us make local products attractive. May more export hubs emerge. Our guiding principle is Zero Defect, Zero Effect," he said.

He said the world is eager to explore trade with India and the government was working to keep prices under check and increase development. "The fundamentals of our economy are strong," he said.