All in all, political dynamism of the two ladies is responsible for both having reached this stage and having outsmarted male politicians! 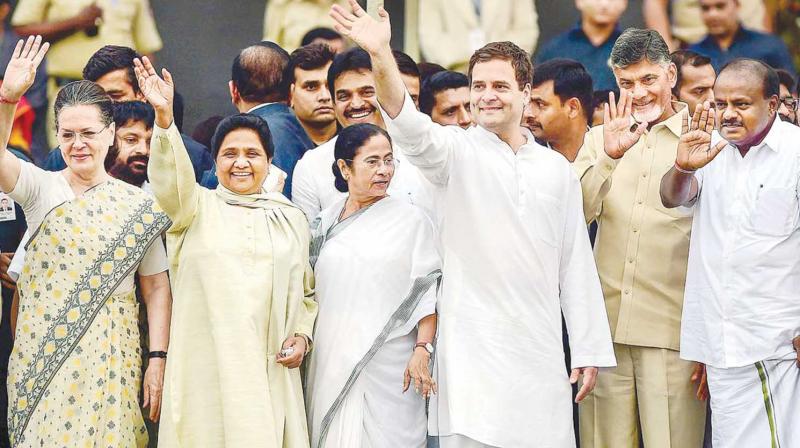 With “news” in the air about one of the two women leaders likely to hold prime ministerial reins, if the anti-BJP grand allia-nce does succeed, it won’t be surprising if ladies dominate this mega-show. “News” is circulating about likelihood of either Mamata Bannerjee (TMC) or Mayawati (BSP) being given the chance to head the next government, if Mr Narendra Modi fails to help his party (BJP) sweep polls. The third lady, who is expected to take decisions and dominate the show, is of course none other than Congress leader Sonia Gandhi.

Had late AIADMK chief Jayalalithaa been around, the situation would have been more interesting. At one time, former Congr-ess member, now a BJP member, Maneka Gandhi also had her eyes set on this chair.

In fact, this ambition of hers played a key role in her parting ways with the Congress. Interestingly, prospects of her entertaining the same aim now or even in near future may be viewed as practically non-existent. Thou-gh BJP has elevated quite a few ladies to ministerial prominence, chan-ces of their gaining grea-ter political heights do not prevail.

Forget ladies, at present, except for Mr Modi, BJP is not keen to boast of any other politician as the party’s prime ministerial candidate. Similar is the political path of Congress. Chances of this party ever naming any other member, but for Rahul Gandhi, as its prime ministerial nominee are non-existent. BJP is, as its moves suggest, is confident about its return to power with Mr Modi at helm.

Congress, however, strong its claims be, is apparently not too sure of receiving sufficient electoral support for Rahul as head of the next government. This does not imply that Congress supporters are not keen to give him a chance or that Rahul is not willing to take the jump. But, the party is not keen to lose its key anti-BJP allies. What matters most for Congress at present is to ensure that results of coming parliamentary elections turn the political tide in its favour.

Now, the big question is why has Congress considered only the two ladies’ name as probable prime ministerial candidates? Undeniably, both Mamata Bannerjee and Mayawati are strong leaders.  Mam-ata’s base is West Bengal while that of Mayawati is Hindi belt and dalit vote-bank. Give a thought, Samajwadi Party leaders or of any other party have not even been mentioned. If the gender factor has been given so much impo-rtance, it is fairly surprising, Sheila Dixit’s name has not been heard of. She is only 80, half-a-decade younger than former Prime Minister Manmo-han Singh.

But yes, it cannot be missed, that though Ms Dixit held command over Delhi state government for around three terms (15 years), her electoral importance has dwindled here following emergence of Aam Aadmi Party (AAP). Also, half-hearted attem-pted made at one point to consider Ms Dixit as prime ministerial candidate carried little importance.

Her electoral campaign was hardly heard of. This in itself is suggestive of what is viewed as an unwritten rule within Congress party. The command is to be held only by a member of Gandhi family, unless he/she has limited or no political base like Dr Manmohan Singh. It cannot be denied that Congress has no other choice.

When following assassination of Rajiv Gandhi, Sonia Gandhi chose to stay in the background, infighting witnessed only led to weakening of the party. Her decision to take command of the Congress has at least contributed to some stability within the party.

And this partly explains as to why the party seems keen to support prime ministerial nominees from outside the party. Rahul may still be, silently, in the race. However, the Congress has accepted the hard reality that its political destiny is least likely to be decided only on basis of its own strength.

Rather, it may weaken further. And the party apparently is in no mood to take this risk. So, rather than wait for electoral results, the Congress has chosen — with other anti-BJP parties — to take the major plunge right now. This is also giving Rahul ample time and opportunity to promote his calibre as a politician. He displayed this fairly well at the recent demonstration held at Jantar Mantar against the abuse of girls at Bihar shelter home. Nevertheless, politically, the cards which favoured Rahul till date, were limited to his family background, his good looks, charming dimpled smile, and his attempts to reach out to the common Indian. Definitely, he is moving much beyond this now. But all things considered, the party leaders are desperately keen for a comeback, even if it demands their being backbenchers in the grand anti-BJP alliance.

Now, with respect to names of the two ladies being floated for prime ministerial position, the Congress and other parties in the anti-BJP move, have apparently no other choice.

Compared to other leaders, both have a strong national and regional standing. The same can be said about command of the two over their respective parties. It isn’t surprising that prospect of either being a prime ministerial nominee is receiving considerable media coverage.

All in all, political dynamism of the two ladies is responsible for both having reached this stage and having outsmarted male politicians!

The writer is a senior journalist. She has come out with two books: Ayodhya Without the Communal Stamp and Image and Substance: Modi’s First Year in Office