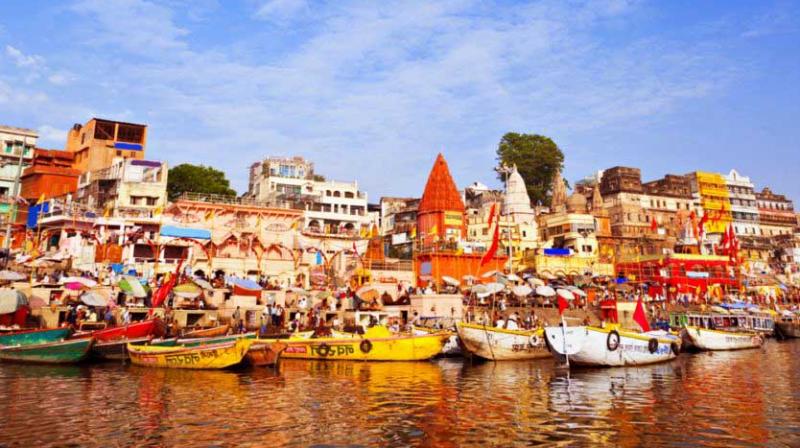 Lucknow: The famous Manikarnika Ghat in Varanasi had never witnessed a spectacle as bizarre as this.

Organised by the “Save Indian Family” organisation, the event was a strong comment on the atrocities being heaped on men by women.

According to Anupam Dubey, “Save Indian Family” secretary, the organisation has about 10,000 members across 20 states.

“The members are those who have been falsely implicated by their wives in cases of dowry and domestic violence. Our society has a huge bias in favour of women and whenever a case related to marital dispute comes up, it is the husband who is billed as an accused even before investigations are held. Along with another organisation called “Daman Welfare Society”, we are trying to raise awareness about the problems faced by husbands and this is the first such initiative,” he explained.

Manohar Kulkarni (name changed on request)  of Pune was among those who performed the “pind-daan” of his marriage on Monday.

Talking to this correspondent on phone, he said, “I am a software engineer in Pune and my wife has been harassing me since the past four years when we got married. She spends all my salary on buying things for herself and whenever I object, she threatens to register a dowry harassment case against me. She has also refused to divorce me. I have tried talking to her parents but they seem to agree with her. My parents are also afraid that I may end up in the lock-up if my wife lodges a complaint”.

Manohar said that he had performed the “pind-daan” of his marriage and sent a video recording of the same to all members of his family and also his in-laws. “I have also sent an application to the police commissioner,” he said.

Anupam Dubey said that a scientist, lawyer and doctor also participated in the “pind-daan ceremony” at the Manikarnika Ghat on Monday where 11 priests organised the ritual.

He said that the maximum cases against men were registered in Madhya Pradesh and Uttar Pradesh; West Bengal, Maharashtra, Delhi and Tamil Nadu were next on the list.