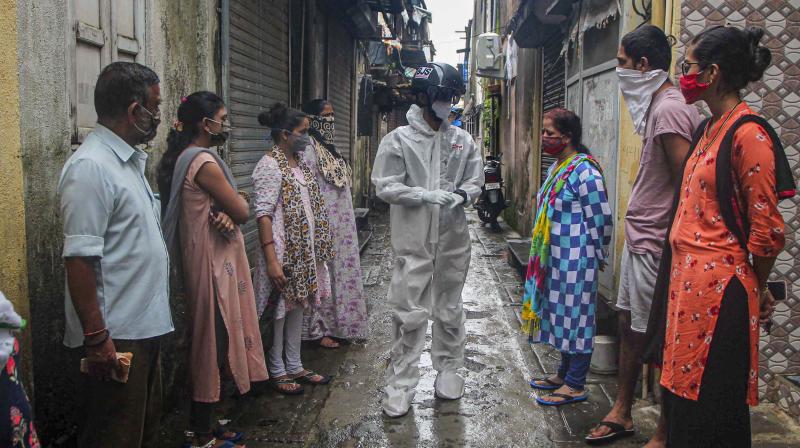 Health official takes a body temperature check of a person in Mumbai. (PTI)

There is some good news in store for Indians amid the coronavirus doom. Even as the coronavirus cases reached 9,36,181 on Wednesday after an addition of 29,429 COVID-19 cases in the last 24 hours, officials said that there has been a progressive decline in daily growth of fresh cases. The officials said compared to the disease growth rate that was 31.28 per cent in March end, it dropped down to 3.24 per cent by July 12.

Meanwhile, the death toll now stands at 24,309 with 582 new fatalities in the last 24 hours, according to the Union Health Ministry data.

The number of recoveries stands at 5,92,031, while there are 3,19,840 active cases of coronavirus infection presently in the country

The government is also counting the current high recovery rate of 63.24 per cent as a positive indicator. The recovery rate in May was 26.59 per cent. However, now 20 states have a recovery rate higher than the national average. Best is Ladakh (87%) followed by Delhi (80%) and Uttarakhand (79%).

Health ministry officials said that as per analysis the spread of virus is not uniform across the country and is limited to certain pockets.

According to them ten states are carrying 86 per cent load of the total infections in India. These are Maharashtra, Tamil Nadu, Karnataka, Delhi, Andhra Pradesh, Uttar Pradesh, Telangana, West Bengal, Gujarat and Assam.

Out of these ten, Maharashtra and Tamil Nadu between them have 50 per cent of all the national cases while rest 36 per cent is shared by other eight. Officials said states like Himachal Pradesh, Kerala and Uttarakhand are not reporting large outbreaks and have managed to contain the virus well through active surveillance and high testing.

“Despite being the second-most populous country of the world, the daily growth rate of new COVID-19 cases in India has been coming down continuously from around 38.2 per cent in March to 3.24 per cent on 12th July,” said Rajesh Bhushan, OSD in Union health ministry.

ICMR DG Dr Balram Bhargava said India is a key player in global vaccine development which has been fast tracked in the country. Two indigenous vaccine candidates are in Phase 1 and 2 stages of human trials in India.

“60% of generic drugs used in the United States are produced in India and 60% of various kinds of vaccines supplied globally too are made in India. Being a key player in vaccine development, it was India’s moral duty to fast track COVID-19 vaccine development and ensure not even a day is lost on regulatory approvals while ensuring that science and ethics are not compromised,” said Dr Bhargava. He added India is in touch with other countries that are developing vaccines and acknowledged Russia’s progress in completing the first phase of clinical trials for the vaccine.