The family is scared that just like last time he would be discharged saying he is fine and fit so that he is not released on bail. 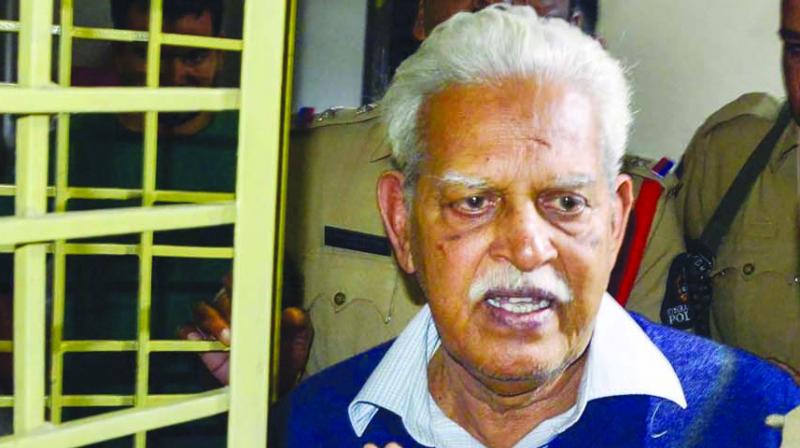 Mumbai: Family of Varavara Rao, arrested in the Elgar Parishad-Maoist links case, has been taken to the state-run JJ Hospital after he complained of dizziness. They alleged that the ailing activist may be declared fit without proper treatment before hearing of his bail application on Friday. Rao has moved Bombay high court after his bail application was rejected by the trial court.

Venugopal Rao, nephew of poet Varavara Rao, while speaking to The Asian Age, said that a petition was filed in June in the Bombay high court against a special NIA court order rejecting Varavara Rao’s bail application. The plea has been adjourned a few times and is scheduled for hearing on July 17.

“However, since his health has deteriorated our lawyer moved an urgent praecipe before the Bombay high court on Monday requesting court to give urgent hearing on his interim bail application but it couldn’t be heard,” said Venugopal. He further added that the lawyer moved another petition in the HC requesting court to prepone hearing on the petition but it was not heard on Tuesday too.

On Monday, Varavara Rao filed two petitions in the Bombay high court, seeking temporary bail owing to his deteriorating health and a direction to the jail authorities to produce his medical records and admit him to a state-run or private hospital.

Rao’s lawyer Nilesh Uke said, “We have filed one more petition in the high court requesting for direction to the Taloja jail superintendent, where Rao was kept before he was admitted in the hospital, to submit all medical records before the court.”

Family members of the poet on Sunday sought the jail authorities to provide him immediate medical care and claimed that when the veteran activist, who hails from Telangana, contacted them last week he was in a “delirious state and hallucinating”. Varavara Rao has been in jail for about 22 months and had earlier approached the special NIA court, seeking bail on medical grounds and the prevailing COVID-19 situation.