India   All India  15 Jul 2019  Nothing new to Al Qaeda’s threat over Kashmir
India, All India

Nothing new to Al Qaeda’s threat over Kashmir

Reports suggest that more local youths have been attracted to Al Qaeda in the past few weeks though the authorities deny it. 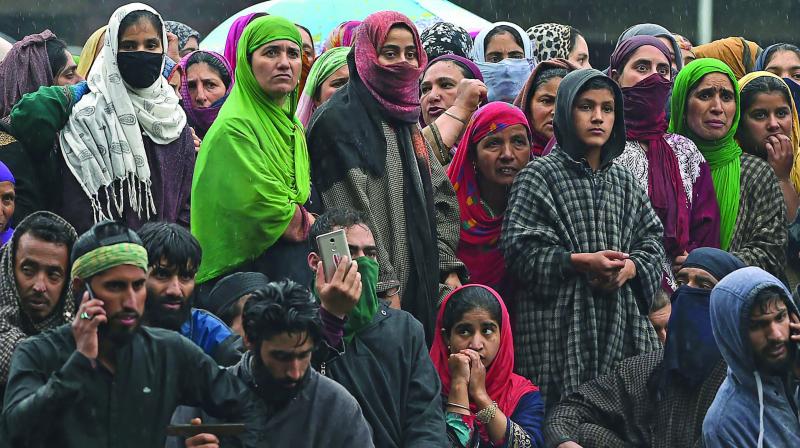 A file photo of Kashmiri villagers at a funeral procession of top militant commander Zakir Musa of Ansar Ghazwat-ul-Hind group, which claims affiliation with Al Qaeda, at Dadsar village in Tral on May 24.

Srinagar: The security forces' officials combating a three-decade-old insurgency in Jammu and Kashmir have said that there is “nothing new” to Al Qaeda’s latest threat over the state. However, they are not going to make light of the potential danger.

“There's nothing new to Al Qaeda’s threat. We’re used to hearing such talk. But, as we have only delivered some fatal blows to terror and militancy in J&K and not eradicated it completely, we can't afford to lower our guard,” said a senior officer of local police's Special Operations Group (SOG) which is known for its aggressive counterinsurgency operations.

The officer who spoke to this newspaper on the condition of anonymity was echoing external affairs ministry spokesperson Raveesh Kumar who during a routine weekly briefing sought to shrug off the Al Qaeda chief Ayman al-Zawahiri threat over Kashmir saying the security forces deployed in the Himalayan state are capable of dealing with it effectively. He said, “We’re used to such sort of threats. I don’t think we should take them seriously. Our security forces are capable of dealing with such situations effectively.”

Al-Zawahiri had in a video asked “Mujahideen in Kashmir” to inflict “unrelenting blows” on the Indian Army and the government. In his message released by the outfit's media wing last week, Al-Zawahiri had also claimed that the “fight in Kashmir” is not a separate conflict but instead is part of the worldwide Muslim community's jihad against a vast array of forces. He further called on “unnamed” scholars to spread this point.

He said, “(I am) of the view that the Mujahideen in Kashmir — at this stage at least — should single-mindedly focus on inflicting unrelenting blows on the Indian Army and government, so as to bleed the Indian economy and make India suffer sustained losses in manpower and equipment.”

Reacting to “unsolicited interventions” into Kashmir affairs, the separatists have said that these have the potential of damaging what they believe is their genuine cause. Separatist leader and chief Muslim cleric of Kashmir, Mirwaiz Umar Farooq, when asked about Al Qaeda's latest threat, reiterated that Kashmiris’ “fight for freedom” was an indigenous movement which has no international agenda. He said, “Any attempt to change the basic nature of Kashmir dispute will be a great disservice to all the sacrifices and collective efforts put in it by the people of the state and hence won't be allowed.”

He added, “Our struggle has the genesis in the Partition of India and is run in the backdrop of the commitments made by both India and Pakistan in international fora. It has a limited outline and no global agenda; hence the organisations like Al Qaeda and the ISIS have no role to play here.”

After Musa was killed in Pulwama's Dadasarra area on May 23, the J&K's director general of police Dilbag Singh had claimed that he was the last surviving cadre of “Ansar Ghazwatul Hind”. He had also said that a new idea of militancy primarily to establish Islamic Caliphate in the restive state introduced by Zakir Musa has ended with his killing.

However, the security forces have since claimed killing, at least three more suspected militants about whom they said they were associated with Al Qaeda.

In May this year, the Islamic State (IS) or Daesh had after the killing of a militant identified as local Kashmiri Ishfaq Ahmed Sofi, alias Abdullah Bhai, in a fight with the security forces in southern Shopian district claimed that it has established a "province" in India.

The killing of Sofi — a resident of the Valley's Sopore area — was followed by violent street protests in Srinagar during which some masked youths waved the IS flags and soon clashed with the security forces. Next day, the IS's Amaq News Agency reported that it has established a new province in India and called it "Wilayah of Hind". It also claimed that its men inflicted casualties on Indian Army during the Shopian gunfight.

The security forces official termed the IS claim as “mere propaganda” to bolster its standing after the group suffered defeat in its so-called caliphate in the Middle East in April. However, Mr. Singh has on more than one occasion s said that though there is no major presence of the IS in Kashmir Valley, the local youths are being radicalised through its ideology. "A very serious activity to radicalise a section of the youth to the extent possible is on by anti-national and anti-social elements. In the past also, those (IS) flags were displayed publicly to create the impression about a very large presence of such elements," he said.

On December 28 last year, a group of masked youths proclaiming allegiance to the IS had after appearing in Srinagar's historic Grand Mosque chanted slogans in favour of making Jammu and Kashmir part of “Islamic caliphate”.

The incident had evoked condemnation by various separatist and mainstream political parties, social and religious organisations and civil society groups. They accused the purported IS enthusiasts of “desecrating” the place of worship. Lashkar-e-Tayyaba, Jaish-e-Muhammad and some other militant outfits too had reacted strongly to the alleged “desecration” of the Grand Mosque and said, “There's no IS in Kashmir nor is it needed here.”

The police said that there were seven militants owing allegiance to the IS active in Kashmir Valley. One of them was killed in a retaliatory fire after he targeted a police party in Srinagar's Zakura area sometime ago. Four more were killed in an encounter with the security forces in South Kashmir in June last year and the sixth member of the group joined another militant outfit sometime ago.

However, reports emanating from militant stratum suggest that more youths have been attracted to the IS and Al Qaeda recently. Meanwhile, the authorities  maintain that these outfits have failed to establish their footprints on a large scale in Muslim-majority Kashmir.