Everyday 5,000 pilgrims from India will be able to visit Gurdwara Darbar Sahib in Kartarpur, and they can travel on foot or in vehicles. 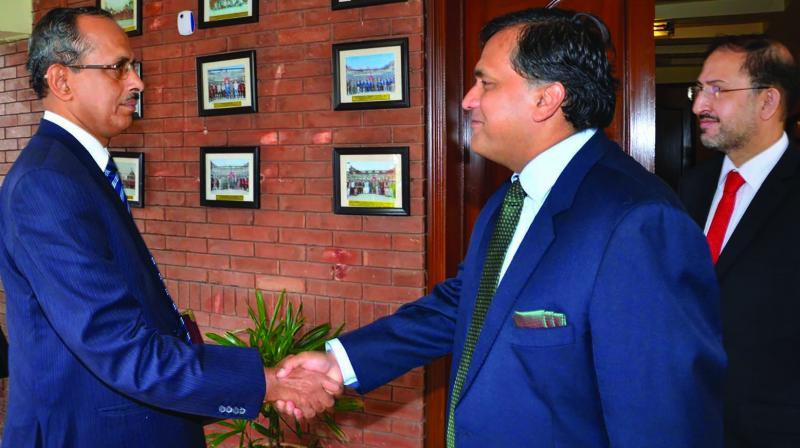 The Indian delegation, headed by S.C.L. Das (left), joint secretary in the ministry of home affairs, is received by Mohammad Faisal, Pakistan’s foreign office spokesperson, for the second round of talks on the Kartarpur corridor at Wagah border, in Lahore. (Photo: PTI)

New Delhi/Islamabad: Pakistan on Sunday agreed to year-long visa-free access to Indians of all faiths, including Overseas Citizenship of India (OCI) card-holders, to Gurdwara Darbar Sahib in Kartarpur. On a daily basis 5,000 pilgrims from India will be able to visit Kartarpur, and they can travel as individuals or in groups, on foot or in vehicles.

These decisions were taken during India and Pakistan’s second round of talks on the Kartarpur Corridor at Wagah border, in Lahore, on Sunday.

The two countries discussed the modalities, infrastructure development, security matters and a draft agreement for facilitation of pilgrims.

Pakistan’s foreign office spokesperson Dr Shah Mohamed Faisal, who led the Pakistani delegation in talks, told mediapersons after the meeting that “80 per cent” of the issues have been agreed upon, and another meeting will be needed to finalise the remaining 20 per cent issues concerning what he said was “a corridor for peace”.

During the talks India also expressed concerns regarding individuals and organisations based in Pakistan who may try to disrupt the pilgrimage and misuse the opportunity to play with the sentiments of the pilgrims.

Sources on both sides said that a few more rounds of talks were needed to thrash out minute details and reach a final agreement.

Some of the issues that remain pending include India’s request to set up a consular office in Kartarpur Sahib Gurudwara to provide assistance to pilgrims, particularly in emergency situations, construction of a bridge on the creek area of river Ravi for round the year access, and allowing 10,000 pilgrims on special occasions like Guru Nanak’s 550th birth anniversary on November 2, 2019.

Dr Faisal said that work on Pakistan side is proceeding speedily and work on more than 70 per cent of the Gurdwara complex, terminal building and road has been completed.

The India government said that significant progress has been made to build state-of-the-art infrastructure, including passenger terminal on the Indian side that can handle over 15,000 pilgrims a day and work on the four-lane highway to the crossing point at the International Boundary is on schedule.

“The government is fully confident that India would be ready to commence the pilgrimage through Kartarpur corridor on the auspicious occasion of the 550th birth Anniversary of Guru Nanak Devji,” ministry of external affairs said.

While discussing the bridge issue, India conveyed concerns regarding the possible flooding of the Dera Baba Nanak and adjoining areas on the Indian side as a result of a causeway proposed to be built by Pakistan on its territory. The Indian delegation shared detailed flood analysis with Pakistan to underscore these concerns.

However, highlighting infrastructural constraints on its side, Pakistan said that it may be able to accommodate many of the Indian proposals in a phased manner, an assurance that the Indian side did not like much.

Making its unhappiness on this issue evident, the Indian side urged Pakistan to reconsider its development plans for the corridor and make it fully functional by November 2, 2019.

Following hectic negotiations, officials said that Pakistan has in-principle agreed to build the bridge at the earliest after India offered to make interim arrangements so that the corridor is operational in November.

“Pakistan side agreed, in principle, to build a bridge at the earliest. Pending the construction of a bridge over the old Ravi creek by Pakistan on their territory, India offered to make interim arrangements for making the corridor operational in November 2019, given the historic importance of the 550th Birth Anniversary of Guru Nanak Dev Ji,” the Indian government said.

The Indian side also used to opportunity to once again raise the issue of encroachment of the land belonging to the Gurudwara and Pakistan authorities were asked to restore this land to the Gurudwara to honor religious sentiments. Pakistan side agreed to look into this issue.

The Indian delegation was led by S.C.L. Das, joint secretary, ministry of home affairs and included other officials from MHA as well as ministry of external affairs, ministry of defence, government of Punjab and the National Highway Authorities of India.

Dr Faisal said that the Pakistani side planted a peace sapling but the Indian side could not participate because they were short on time and had to return to India.