Ethnic Tibetans constitute about 92 per cent of the population while the eight per cent comprises Han Chinese. 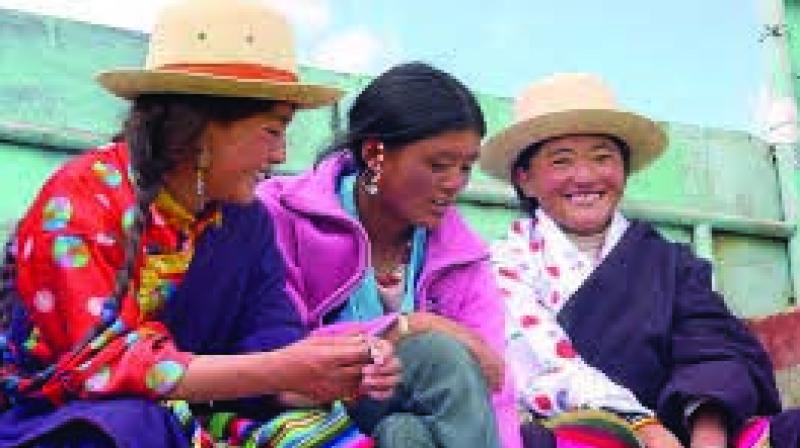 The Chinese government has also built museums such as the one on ‘Serf’s Emanicipation’ in Lhasa and another in Beijing showcasing its efforts to abolish ‘feudalism’ in Tibet.

Lhasa (Tibet): Inter-racial love marriages between people belonging to China’s ethnic Han Chinese majority and Tibetans have been taking place in Tibet and such couples are being hailed as “national role models for ethnic unity”, local officials and members of ground-level community development units in the Tibet Autonomous Region (TAR) of China have said.

At least some of these couples have also availed material support from local government authorities, local officials said. In at least one of these local community units, the number of inter-racial marriages is close to 10 per cent of the total. But a senior Chinese government official in the provincial Tibetan capital of Lhasa said ethnic Tibetans still constitute an overwhelming 92 per cent of the population in the region.

The Chinese government has also built museums such as the one on “Serf’s Emanicipation” in Lhasa and another in Beijing showcasing its efforts to abolish “feudalism” in Tibet from 1950, the year the Chinese People’s Liberation Army (PLA) swept into Tibet. Also preserved are erstwhile “estates” to showcase how wealthy landlords lived in luxury till the 1940s at the expense of the “serfs” or slaves they owned.

Even as the Chinese government has also built impressive roads and other infrastructure in Tibet in the past few decades that has seen unprecedented development and transformation in the region bordering  India. Chinese government officials said they have focused on the principle of “ethnic unity” to facilitate the harmonious co-existence of people belonging to different races especially in regions such as Tibet.

During a visit by a group of Indian reporters to the Jiangluo community area in the Sangzhuzi district of Shigatse, the second largest city in Tibet after Lhasa, local area residents said their area has 500 households and 1,600 residents out of which 40 households (close to 10 per cent) comprise married couples belonging to different races.

When asked whether incentives are provided in such cases, local officials said the inter-racial couples are given “material support” by the government authorities.

Wang Neng Sheng, the director-general of the People’s Government Information Office of the Tibet Autonomous Region of China, told the visiting Indian reporters that “ethnic Tibetans constitute about 92 per cent of the population in Tibet while the remaining eight per cent comprises Han Chinese and other races.” The assertion was made to counter “Western media reports” that ethnic Tibetans could eventually be overwhelmed by growing migration to Tibet from China’s vast ethnic Han Chinese majority.

Mr. Wang added that while China’s ruling Communist Party is atheist wherein the members do not believe in God, the religious rights of the Tibetan Buddhist population are “fully respected”.

He said, “Religion can’t interfere in politics, justice and education. It is the same as in the Western countries. It (religion) must be free of foreign influence.”