India   All India  15 Jul 2019  14 including 13 Army soldiers dead after building collapses in Himachal
India, All India

14 including 13 Army soldiers dead after building collapses in Himachal 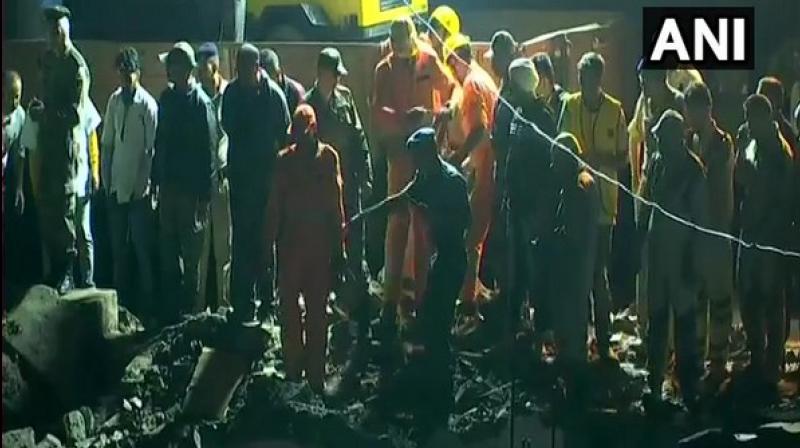 At least seven people, including six Army personnel, were killed and 28 injured after a four-storey building collapsed in Himachal Pradesh's Solan district, the police said on Monday. (Photo: ANI)

Shimla: At least 14 people, including 13 Army personnel after a four-storey building collapsed in Himachal Pradesh's Solan district, the police said on Monday.

However, 30 Army personnel and 12 civilians, were trapped in the debris, all of them have been pulled out.

The building, located on the Nahan-Kumarhatti road, housed a restaurant and collapsed on Sunday evening after heavy showers, they said. The bodies of six army men and a civilian have been extricated so far from the debris, Solan Superintendent of Police Madhusudan Sharma said.

An FIR has been lodged against the owner of the building that collapsed here on Sunday, said Solan Deputy Commissioner KC Chaman.

Chaman also said an inquiry will be conducted to ascertain the cause of the mishap.

At least seven persons are still feared trapped under the debris, Solan sub divisional magistrate Rohit Rathore said. According to Solan Deputy Commissioner (DC) K C Chaman, at least 42 people were trapped under the rubble of the collapsed building of which 28 including 17 Army personnel and 11 civilians, have been rescued.

The Army personnel from nearby Dagshai cantonment had reportedly gone for lunch at the restaurant. Expressing grief, Chief Minister Jai Ram Thakur has ordered an inquiry into the incident, an official spokesperson said, adding that he would visit Solan district to take stock of the rescue work and enquired about the condition of the injured on on Monday morning.