NITI Aayog Vice Chairman Rajiv Kumar was responding to a query regarding Sen's recent remarks about the present government. 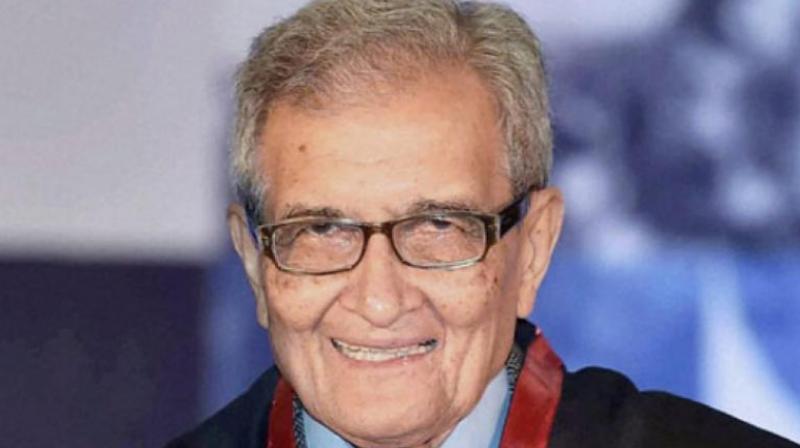 'We are getting backwards in the fastest-growing economy. Now, India is the second worst. Pakistan has managed to shield us from being the worst,' Amartya Sen said. (Photo: File)

New Delhi: Days after Amartya Sen lamented that India has taken a quantum jump backwards since 2014, NITI Aayog Vice Chairman Rajiv Kumar on Sunday said the Nobel laureate should spend some time in the country to see the structural reforms undertaken by the Modi government.

"I wish Professor Amartya Sen would spend some time within India and actually look at conditions on the ground. And at least review all work that has been done in the last four years by the Modi government before making such statements," Kumar told PTI in an interview.

He was responding to a query regarding Sen's recent remarks about the present government.

"I actually would like to challenge him to show me another period of four years where so much work has been done for the making India cleaner, inclusive and more caring economy," Kumar said.

According to him, structural reforms that have been taken are ensuring that benefits of growth reach to the last person.

"If these things are not clear to him, then, I think he should spend some time here," he added.

Prime Minister Narendra Modi is the Chairman of NITI Aayog. Modi-led NDA government came to power in May 2014.

On July 17, speaking at the launch of Bharat aur Uske Virodhabhas - the Hindi edition of his book 'An Uncertain Glory: India and its Contradictions' - Sen had said that due to moving backward the country is now the second worst in the region.

"Things have gone pretty badly wrong... It has taken a quantum jump in the wrong direction since 2014. We are getting backwards in the fastest-growing economy. Now, India is the second worst. Pakistan has managed to shield us from being the worst," Sen had said.