Dalits can now be Naga sadhus

BJP denies decision by apex body of seers has any political overtones. 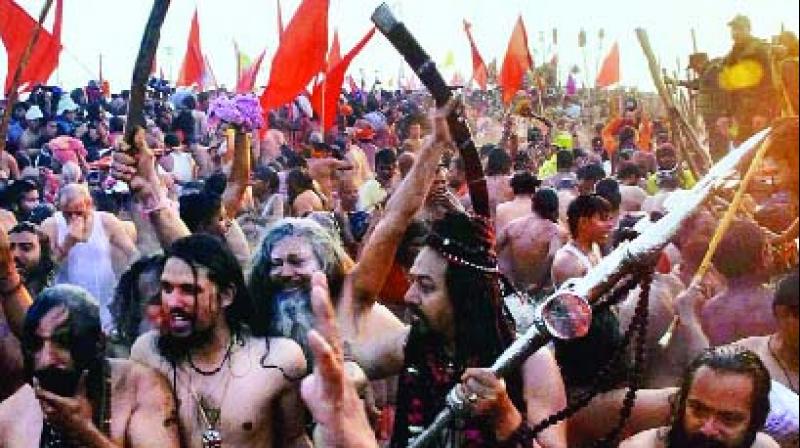 The ABAP will induct dalits as Naga sadhus in the Ardh Kumbh, which is scheduled to be held in Allahabad in January-February 2019.

Lucknow: The Akhil Bhartiya Akhara Parishad (ABAP), the apex body of saints and seers, has decided to ordain dalits as Naga sadhus.

The ABAP will induct dalits as Naga sadhus in the Ardh Kumbh, which is scheduled to be held in Allahabad in January-February 2019.

The timing of this coincides with the general elections and is apparently designed to consolidate the BJP’s dalit outreach.

ABAP president Mahant Narendra Giri, who is also the head of the Niranjani Akhara, confirmed that the ceremony for ordaining dalits into the Naga cult will take place in the 2019 Ardh Kumbh.

“It is going to be a historic moment and all the 13 major Akharas have agreed on this,” he said.

Till now, only those belonging to upper castes, including brahmins, kshatriya and vaishyas, were ordained as Naga sadhus after a tedious process. Lower castes and dalits, as a tradition, were not included into the cult.

“If dalits and members of other lower castes are willing to lead the difficult life of a Naga sadhus, we have no problem in bringing them into the cult. In fact, we feel that this will put an end to caste divides,” he said.

The opening of doors for dalits is a major development in the world of seers.

Mahant Pradeep Acharya, a well-known seer in Lucknow, said, “This is a landmark in the history of Hindu religion which has been carried forward by upper castes. It signals the changing times and also the acceptability of all castes in the religion. We have come a long way from the days when dalits were not even allowed to enter temples.”

Mahant Divyagiri, the first woman priestess of the Mankameshwar temple in Lucknow, also welcomed the move and said that it would give a sense of belonging to the dalit community.

However, the BJP denied that the decision to ordain dalits as Naga sadhus had any political overtones.

BJP general secretary Vijay Bahadur Pathak said, “This decision is taken by the Akhara Parishad and there is no politics behind it. The timing of the ceremony may happen to coincide with the general elections but we have nothing to do with it. The BJP since the past several years, has been welcoming dalits into the party.”

The Kumbh Mela, incidentally, is known for ceremonies related to ordaini-ng of Naga sadhus. The ceremonies that include shaving of head and performing one’s own post-death ritual to signal alienation from worldly matters attract huge crowds.

The highlight of the mela, which is held every six years, is the ceremony that heralds the alienation of Naga sadhus from the civilisation.

After being ordained, the Naga sadhus live in clusters called Akharas and shun interaction with the society, except during the Kumbh Mela. They rem-ain naked and carry a trident with them. The Naga sadhus practice celibacy to escape from the cycle of birth and death and to attend salvation.