Train accident averted on Mumbai-Pune route due to CCTV cameras

A huge boulder fell on the track near Lonavala around 8.15 pm Thursday, which held up Mumbai-Kolhapur Sahyadri Express for over two hours. 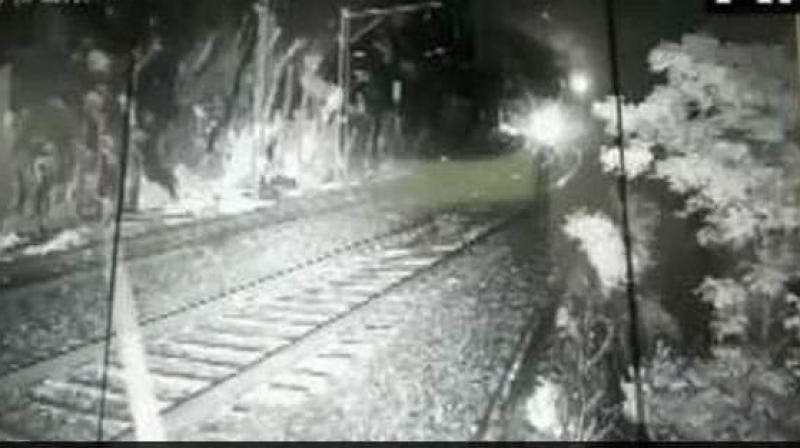 An accident was averted as CCTV monitoring staff noticed the boulder in time, a railway official said on Friday. (Photo: Twitter/ ANI)

Mumbai: CCTV cameras installed in the "ghat'' (hilly) section of Mumbai-Pune route for monitoring during monsoon proved useful Thursday night as a train was stopped well in time before it could hit a fallen boulder.

A huge boulder fell on the track near Lonavala around 8.15 pm Thursday, which held up the Mumbai-Kolhapur Sahyadri Express for over two hours.

But an accident was averted as CCTV monitoring staff noticed the boulder in time, a railway official said on Friday.

#WATCH Maharashtra: A boulder fell on the railway tracks near Lonavala, around 8 pm on 13 June. Mumbai-Kolhapur 11023 Sahyadri Express was delayed for around 2 hours due to the boulder. All lines were made operational by 11 pm. (Video source: Central Railway CPRO) pic.twitter.com/Jbq3iOSyRe

"The monitoring staff not only alerted higher authorities, but also ensured that power supply to the overhead equipment was switched off and oncoming trains were stopped well in time," said Sunil Udasi, Chief Spokesperson, Central Railway.

The Sahyadri Express was reversed to Thakurwadi station and then it resumed its journey towards Kolhapur about 10.30 pm, he said.

"Passengers were provided water at Thakurwadi and snacks when the train reached Lonavala around 11 pm," Udasi added.

The boulder, 2.3 meters long, 1.6 meters high and 2.2 meter wide, was big enough to cause serious damage if a train were to hit it, he said.

The traffic on the route was restored in "shortest possible time", Udasi added.