India will be 5 trillion dollar economy by 2024: PM Modi at NITI Aayog's meet 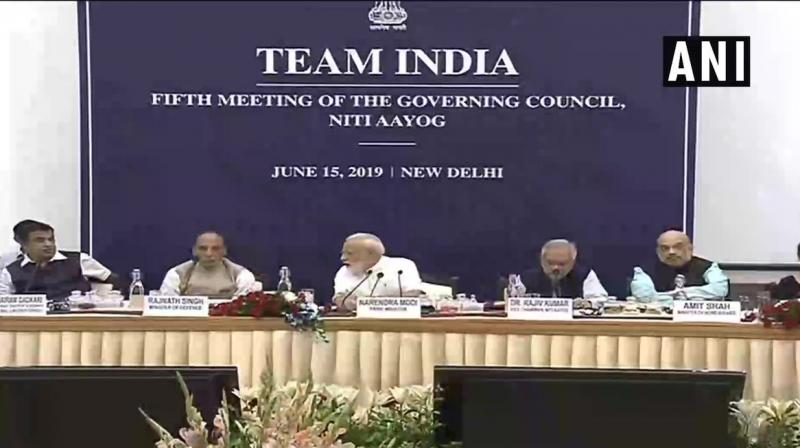 While proposing the goal at NITI Aayog's fifth governing council meeting at Rashtrapati Bhavan, PM Modi said ''it is challenging but achievable''.

''Export sector plays a vital role in boosting income and employment; states should focus on export promotion,'' he added.

This is NITI Aayog's first meeting after PM Modi-led National Democratic Alliance formed the government for the second time in a row.

Agrarian crisis, internal security with a special focus on Maoist-affected areas will be on the agenda. Chief Ministers, Lieutenant Governors, union ministers and senior officials will be in attendance for the meeting, NDTV reported.

West Bengal Chief Minister Mamata Banerjee has refused to attend the meeting stating that the NITI Aayog has no financial power to support state plans.

Telangana Chief Minister K Chandrashekhar Rao will also skip the meeting as he would be busy inaugurating an irrigation project.

Reddy said he took an appointment with the Home Minister "to try and prevail on him and to also soften PM's heart on the special category status, what we will definitely be asking for in tomorrow's (Saturday) NITI Aayog meeting."

A similar demand is expected to come from Bihar’s Chief Minister Nitish Kumar. Kumar has been demanding this for quite some time now.

Odisha has also sought the demand for special status which the ruling Biju Janata Dal would be raising along with YSRCP and Janata Dal (United).

Chief Ministers of the Congress-ruled states will share the benefits of the loan-waiver scheme implemented by them in their states.

NITI Aayog last met on June 17 in the previous year.