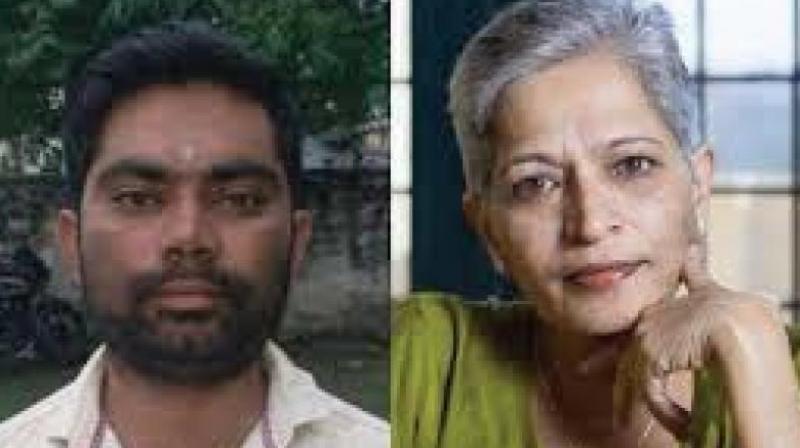 Parashuram Waghmare, the last of the six suspects arrested in connection with the killing of journalist-activist Gauri Lankesh, was her assassin, the SIT probing the sensational case said today. (Photo: File)

Bengaluru: Parashuram Waghmare, the last of the six suspects arrested in connection with the killing of journalist-activist Gauri Lankesh, was her assassin, the SIT probing the sensational case said today.

"Waghmare shot Lankesh and the forensic report has confirmed that (rationalists) Govind Pansare, M M Kalburgi and Lankesh were murdered with the same weapon," a senior officer in the SIT told news agency PTI wishing not to be named. He, however, said the weapon was yet to be traced.

Forensic examination can lead to such a conclusion when the hammer of a gun has left identical marks at the rear of a bullet even if the weapon itself has not been found.

The official said the organisation, composed of people drawn from Hindu right groups, had around 60 members spread across at least five states but had no name. "We discovered that this gang has a network in Madhya Pradesh, Gujarat, Maharashtra, Goa and Karnataka. We did not find their Uttar Pradesh connection so far," the official said.

He said though it recruited people from hardline Hindutva organisations like Maharashtra-based Hindu Jagruti Samiti and Sanatan Sanstha, these outfits may not be directly responsible for the killings. Both organisations had denied their role in the killing of the three.

Sujith Kumar alias Praveen used to recruit people for the gang, the official said, adding it was following his interrogation that the network was busted.

The SIT, he said, suspected three more people were present when Gauri Lankesh was shot dead at the entrance of her Bengaluru residence on September 5, 2017.

Speculation was rife that Parshuram Waghmare, whose physical appearance matched that of the man whose image was caught on the CCTV camera at Gauri Lankesh's home on the day of the killing, was her assassin. The officer said the gang meticulously planned its operations before executing them.

The entire process of reconnaissance, identifying the weaknesses of the targets and their elimination would take anywhere between six months and a year. "The gang had almost reached the last phase of killing Prof K S Bhagawan (Kannada writer) when we nabbed them," the officer said.

The Karnataka police had uncovered the plot to kill Bhagwan recently, and it was during the interrogation of the four arrested accused that they grew suspicious about their involvement in Gauri Lankesh's killing.

Bhagwan had often angered the right-wing outfits with his writing and utterances against Hindu Gods.

The SIT had recently recovered a diary from the suspects which contained a hit list of targets. The name of film and theatre personality Girish Karnad figured in the list, the officer said, adding the Jnanpith awardee's surveillance was in the "last phase". Other than Bhagvan and Karnad, former minister and literateur B T Lalitha Naik, rationalist C S Dwarakanath and pontiff Veerabhadra Channamalla Swamy of Nidumamidi Mutt were also on the hit list. All of them have been quite vocal in criticising the Hindu right.

Kalburgi, a Sahitya Akademi Award winner and a doughty campaigner against superstition in Hinduism, was shot dead in August 2015 at his home in Karnataka's Dharwad district.

In February the same year, Govind Pansare, a Left politician and rationalist, was shot at and fatally injured by unidentified assailants in Kolhapur in Maharashtra.