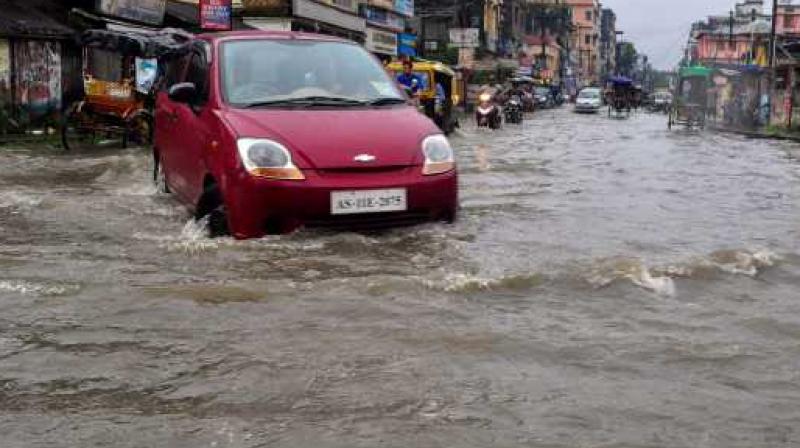 A car wades through a flooded street after heavy downpour in Silchar, Assam, on Thursday. (Photo: PTI)

Guwahati: The incessant rain and flood on Thursday forced Northeast Frontier Railways to suspend as many as four train services as a tunnel washed out in Assam’s Lumding-Badarpur hill section, snapping rail connectivity to Tripura as well as Barrak Valley in Assam.

In southern Assam’s Barak Valley bordering Bangladesh, where the flood situation has worsened on Thursday, the inland water transport (IWT) department has also suspended its all ferry services due to rising water level of all the rivers.

Informing that raising water level under Guwahati division was also a matter of concern, the IWT director Bharat Bhushan Dev Choudhury said, “As of now ferry services are unaffected in Guwahati. However in Barak valley more than 30,000 ferry passengers have been affected.”

The Northeast Frontier Railways PRO said that landslides in as many as five places in Lumding – Badarpur hill section due to heavy rain in that area has affected the normal train running in that section. “All the landslides have occurred between 1.30 am and 3.30 am today. As a result, train running over that section has been suspended,” he said.

“There is no passenger train stranded within the affected section. Although the extent of damage is yet to be fully ascertained, restoration work has already started in all affected locations. Divisional Railway Manager, Lumding is already at site monitoring the situation. Work is going on to restart the train services as early as possible,” the PRO said.

Meanwhile, more than 1.50 lakh people have been affected by the first wave of flood that hit Assam on Wednesday, with six districts currently reeling under the flood since monsoon hit the state early this month.

Torrential rain in Bokakhat sub-division of Golaghat and neighboring Karbi Anglong East and West districts has inundated large stretch of National Highway 37 that crosses through the World Heritage Site Kaziranga National Park, affecting movement of vehicles on the highway.