India   All India  15 Jun 2017  Those who eat beef should be brought before public, hanged: Sadhvi Saraswati
India, All India

Those who eat beef should be brought before public, hanged: Sadhvi Saraswati

Sadhvi Saraswati also wanted the Hindus to keep arms in their homes to protect themselves. 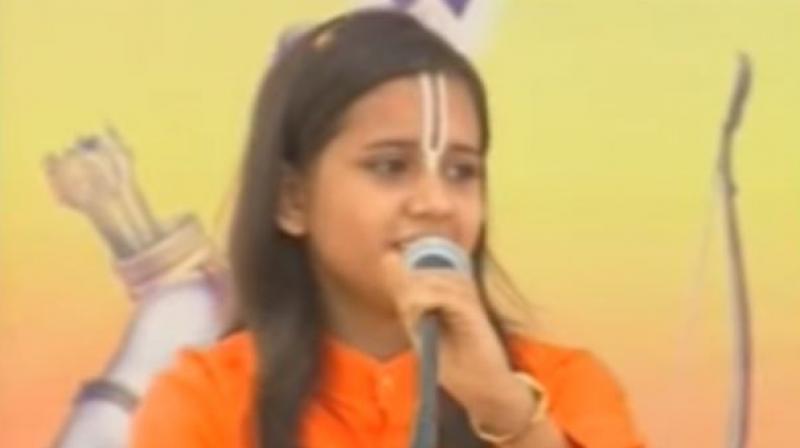 The remarks made by Sadhvi Saraswati on Wednesday evening triggered a sharp reaction from the Congress. (Photo: Youtube | Screengrab)

Panaji: Amid the raging debate over cow slaughter and consumption of beef, a sadhvi attending a meet of various Hindu outfits in Panaji has said those who consider eating beef as a status symbol should be hanged.

The remarks made by Sadhvi Saraswati on Wednesday evening triggered a sharp reaction from the Congress, which said her speech would spark communal hatred and asked the BJP-led government in Goa to lodge an FIR against her.

"I appeal to the Government of India that those people who consider eating meat of their own mother as a status symbol should be hanged," Sadhvi Saraswati from Madhya Pradesh said.

"They (those who eat beef) should be brought before the public and hanged, only then will people know that it is our duty to protect 'gau mata'," she said while commenting on beef consumption during the inauguration of All India Hindu Convention at Ramnathi village in Panaji.

Sadhvi Saraswati, President of Sanatan Dharma Prachar Seva Samiti of Chhindwada in MP, also wanted the Hindus to keep arms in their homes to protect themselves.

"If we do not stock arms, we will be destroyed in future," she said.

"Today Bharat is under attack from all directions. Efforts are being made to separate Kashmir from Bharat and also stop the Amarnath pilgrimage. Bharatmata-Gaumata are being censured," she said.

Slamming the demand by some political parties to ban the outfits calling for the creation of the "Hindu rashtra", she said they should realise that no power in the country can prevent Hindus from establishing the "Hindu Nation".

She said "there is no such thing as saffron terrorism," adding that "saffron means dedicated life for the nation and dharma."

Nearly 130 Hindu organisations from 21 states and countries including Bangladesh, Sri Lanka and Nepal are attending the four-day convention, its organisers said

Reacting to the speeches made at the meet, All India Congress Committee secretary Girish Chodankar questioned the Manohar Parrikar-led state government's silence over them.

"The statements provoking communal hatred are made during the convention. The state government has become a party to the entire programme by maintaining silence and allowing it to continue," Chodankar alleged.

Sardesai, whose party is now an ally of the ruling BJP, had in the past hit out at the VHP's claim that it would ban beef in the state. He had said that those who were trying to create communal disharmony would be dealt with strongly, Chodankar said

"Why is he (Sardesai) silent over Sadhvi's statement promoting violence?" Chodankar asked. He said the government should have taken suo moto cognisance of the sadhvi's comments and filed an FIR against her for 'hate speech'.