On the way, police stopped the father and arranged a government dead body-carrying vehicle, and sent the body to the village. 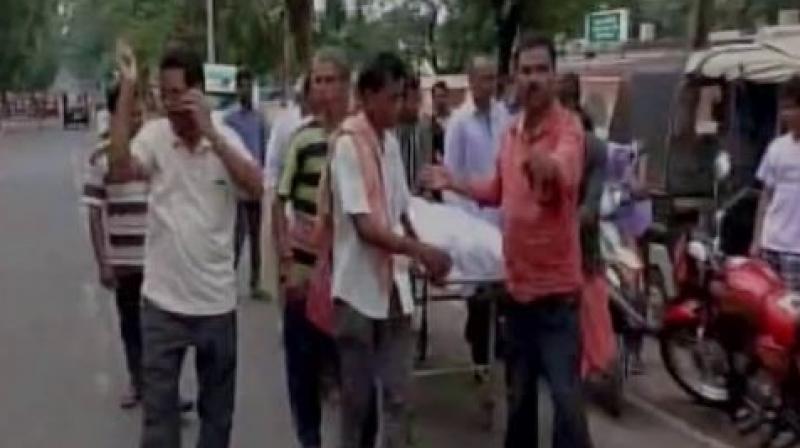 Family carry body of girl on stretcher after hospital did not provide ambulance. (Photo: ANI | Twitter)

Kandhamal (Odisha): A father carried the dead body of his minor daughter on the district medical stretcher to his village, in perhaps yet another shameful incident.

While on the way, the Phulbani Town Police stopped the father and arranged a Mahaprayana, a government dead body-carrying vehicle, and sent the body to the village.

Kandhamal's Collector Dr Brunda D has ordered an enquiry into the incident.

The Project Director of District Rural Development Agency (DRDA) Tusar Kant Mohanty has been investigating the case after visiting the district medical and has questioned different officials. He also visited the village of the deceased girl.

"Today, he might submit the report and stringent action will be taken against the accused," said the collector.

"An internal enquiry has been conducted and everything will be clear after the enquiry," said Kandhamal's Chief District Medical Officer (CDMO).

Notably, last year after Dana Majhi incident, the Odisha Government had launched the Mahaprayan scheme under which the government provides hearse service to the beneficiaries for carrying the dead body from hospital to their intended destination.

It is interesting to note that it was the same collector and the DM, who was also the DM of Kalahandi during the Dana Majhi incident. Following the incident, she was transferred to Kandhamal.