Constable Shabir Ahmad was shot outside his residence at Bogund in Kulgam district. 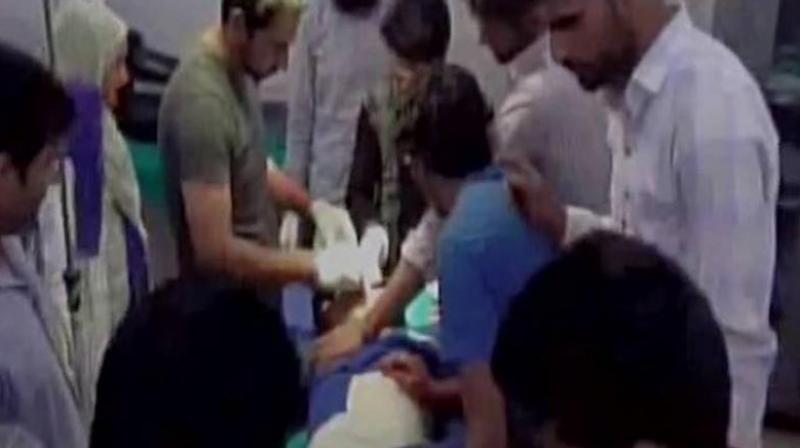 The cop, who had received multiple bullet wounds, was rushed to a nearby hospital where doctors declared him brought dead. (Photo: ANI)

Srinagar: A Jammu and Kashmir policeman was shot dead by militants in southern Kulgam district on Thursday afternoon.

The officials and witnesses said that the cop, Shabir Ahmed Dar, was shot from point blank range by assailants in Bogund village of Kulgam. He was rushed to a nearby hospital where doctors declared him brought dead. They said he had received multiple bullet wounds.

One report said that Dar, associated with the Jammu and Kashmir police’s counter insurgency Special Operations Group (SoG), was posted in Damhal area of the district but was in home village Bogund on vacations. “He was on leave for past few days and was working in the family’s paddy feild when the gunmen targeted him,” a local police official said.

However, according to another report, Dar was returning from duty in the district’s Devsar area when targeted by the gunmen just outside his home. The locals added that Dar, on seeing the gunmen coming towards him, tried to flee but was chased by them and then shot five times.

The murder comes close on the heels of the militants striking with impunity across the Kashmir Valley. They carried out four grenade attacks at the security forces’ camps and foot patrols in southern Pulwama district and Srinagar city, leaving over a dozen personnel injured. After the attacks for which Jaish-e-Muhammad and Al-Umar Mujahedin jointly claimed responsibility, the authorities had sounded a high alert and particularly asked the CRPF and the J&K police to be more vigilant and thwart any such acts by militants.

On May 9, Ummer Fayaz Parray, a 22-year-old officer who was working with Army’s 2 Rajputana Rifles was on leave when abducted by two masked gunmen from the wedding of his (maternal) cousin in Batpora village of Kulgam district. Next morning, his bullet-riddled corpse was found in Harmain area of neighbouring Shopian district.

In March and April this year, the Valley had witnessed a series of militant attacks at policemen and their families following which the police department had issued an advisory asking its field personnel to avoid visiting their homes “for the next few months”. It while referring to the “unfortunate” incidents wherein “militants and anti-national and anti-social elements have caused damage to the life and property of police personnel”, asked them to exercise extreme caution while visiting their homes.

“They should preferably avoid visiting their homes for the next few months as their personal security is of paramount importance," the advisory had said.

It also asked all the heads of various formations to brief their officers and men regarding the threat so the life and property of police personnel were secured.