India   All India  15 Jun 2017  If BJP-ruled Maharashta, UP can give loan waiver, why can't MP: Scindia
India, All India

If BJP-ruled Maharashta, UP can give loan waiver, why can't MP: Scindia

Scindia, criticised the BJP govt for not taking any action against those who fired at farmers in Mandsaur last week, killing 5. 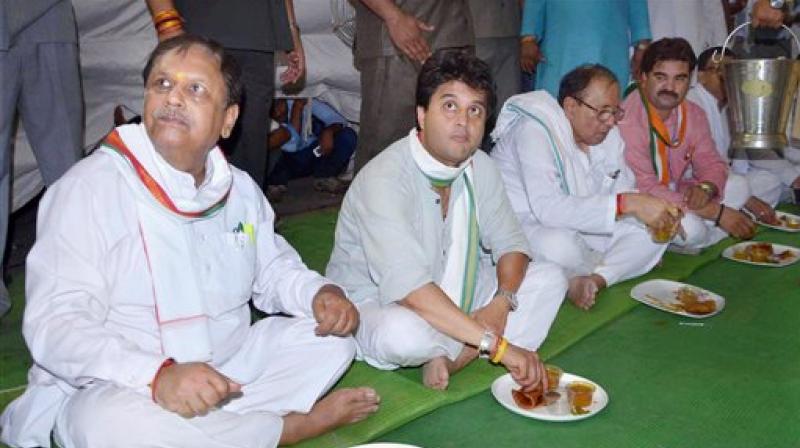 Congress leader Jyotiraditya Scindia having meal with the party leaders and workers during the 72-hour Satyagraha to protest against killing of farrmers in Mandsaur police firing in Bhopal on Wednesday. (Photo: PTI)

Scindia, sitting on a 72-hour satyagraha since Wednesday in support of farmers, also criticised the state's BJP government for not taking any action against those who fired at the farmers in Mandsaur last week, killing five of them.

Following protests by cultivators in Maharashtra, the Devendra Fadnavis-led government on Sunday announced a loan waiver for farmers and decided to form a committee to work out the debt-relief criteria.

The Yogi Adityanath-led BJP government in Uttar Pradesh had also recently announced a loan-waiver of Rs 36,359 crore for small and marginal farmers in the state.

"When the BJP governments in Uttar Pradesh and Maharashtra have announced to waive farm loans, why the same party's regime in Madhya Pradesh has been shying away from announcing the same," Scindia said during his ongoing 'satyagraha' at TT Nagar's Dussehra Maidan Bhopal.

He said Prime Minister Narendra Modi himself had made several promises to make farming a beneficial venture with slogans like 'Abki Bar Kisano Ki Sarkar". "The prime minister made a series of promises to make farming a profitable venture during election campaign. Now, the Centre is saying the state governments will have to arrange funds for loan waiver on their own and that the Centre government would not extend any help," he said.

The Centre is not budging despite the fact that nearly 12,000 farmers are committing suicides every year, Scindia, the Congress chief whip in Lok Sabha, claimed.

He also hit out at the Madhya Pradesh government for not taking action against those who fired at the farmers in Mandsaur.

He said Chief Minister Shivraj Singh Chouhan is now trying to ‘mollify’ the families of the farmers killed by giving them a compensation of Rs 1 crore each, jobs to their kin, among others.

The Congress leader also said that the onion purchase by the state government has also been marred by mismanagement.