India   All India  15 Jun 2017  GJM protesters, cops hurl stones at each other; car set ablaze in Darjeeling
India, All India

GJM protesters, cops hurl stones at each other; car set ablaze in Darjeeling

The demand for a separate Gorkhaland state is fast turning into a major political crisis for Chief Minister Mamta Banerjee. 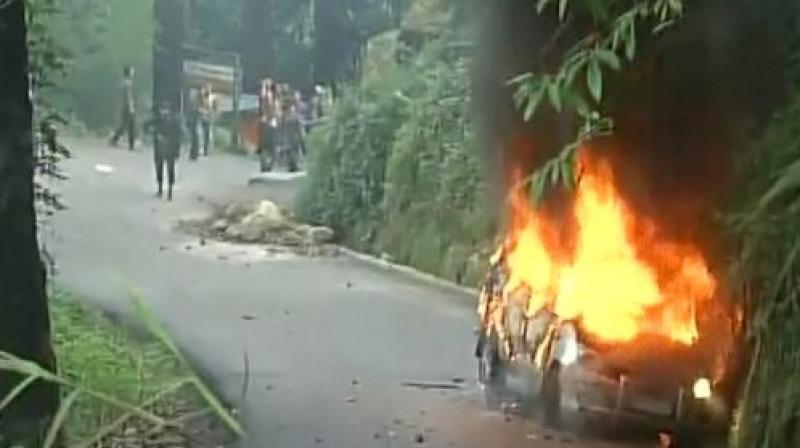 Darjeeling (WB): Protesters and riot police hurled stones at each other and a car was set ablaze after a series of raids today on premises connected with the Gorkha Janmukti Morcha chief, whose separatist campaign was spiralling deeper into violence.

The demand by the GJM for a separate Gorkhaland state to be carved out of the Darjeeling hills of West Bengal state is fast turning into a major political crisis for Chief Minister Mamta Banerjee, and is likely to cripple the critical tourist industry during the peak summer season.

In the fog-shrouded hilly roads of Darjeeling, GJM activists sparred with paramilitary personnel, hurling stones from a distance. The policemen responded by throwing stones back as a car burnt nearby. It was not clear if the car was that of a civilian or belonged to the police.

Earlier today, police recovered more than 300 weapons, including arrows and explosives in raids on premises connected with Gorkha Janmukti Morcha chief Bimal Gurung, sparking a call by the separatist group for an indefinite shutdown in Darjeeling hills.

Police said some party activists also were arrested today in the raids in Singmari and Patlebas areas of Darjeeling.

The developments came a day after Gurung said that his group's campaign will not stop until it a separate Gorkhaland state is created. He has asked tourists to avoid Darjeeling, a tea-growing region of West Bengal state and also one of the most popular tourist destinations in India.

"Some of the premises of Gurung and other GJM activists were raided. We conducted the raids on the basis of concrete information. The raids are still on. We have arrested a few GJM activists," a senior police official said on condition of anonymity.

The police, however, denied that Gurung's residence had been raided.

Following the raids, the GJM called for an indefinite shutdown in the hills from today.

"The state government is indulging in politics of witch-hunting," Giri, the GJM general secretary, said.

On the recovery of weapons, the GJM leader said, "What have they found? Khukri is part of our tradition, what is the harm in keeping it? Bows and arrows are traditional weapons. They were meant for students for archery competition".

"The GJM is being targeted as we are fighting for a separate state. The police and the state government are trying to frame false cases against us," he alleged.

"We will inform the Centre of the police atrocities and seek Centre's intervention", Giri who is in Delhi, said over phone.

The raids came on the fourth day of the GJM-sponsored indefinite strike in government and GTA offices in the hills. The GJM's call for a separate state of Gorkhaland gained momentum after six other hill parties extended their support and unanimously passed a resolution on Tuesday for a new state to be carved out of Darjeeling hills.

The area is largely populated by Gorkhas who resent the imposition of Bengali, the predominant language of the rest of the state.

Prominent among the six states to join GJM is the Gorkha National Liberation Front (GNLF), which broke its alliance with the ruling Trinamool Congress.

The Centre has dispatched 600 paramilitary personnel to assist the West Bengal government in restoring normalcy in violence-hit Darjeeling hills which witnessed incidents of stone pelting during GJM-sponsored indefinite bandh.

The Centre had also sought a detailed report on the prevailing situation in the hill district from the state government.