Health ministry is in close touch with UP, Bihar govt to ensure immediate check to stop the spread 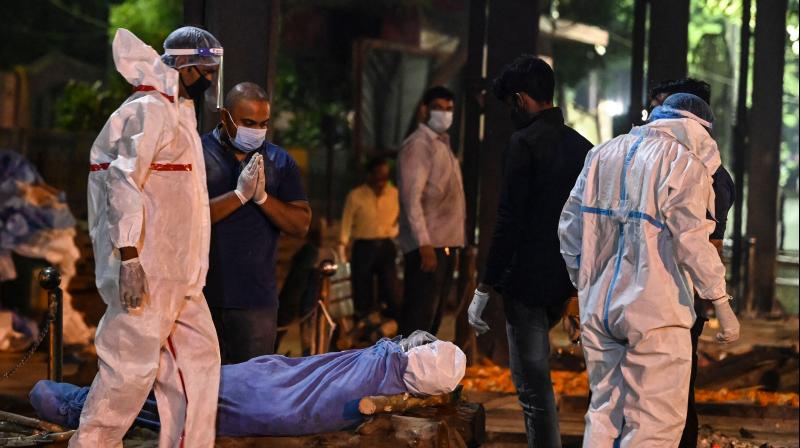 The Union home ministry is in close touch with Uttar Pradesh and Bihar governments to ensure that dumping of bodies in the Ganga is checked immediately as this could lead to further spread of the Corona pandemic in the two states. — Representational image/AFP

New Delhi: The Union home ministry has revealed that nearly 2,000 bodies have been retrieved from the Ganga by various district administrations in Uttar Pradesh and Bihar in the last one week or so. Officials say that these bodies are most likely of Corona patients who died in remote villages along the Ganga. Since most of the villagers are extremely poor and not able to finance the last rites of their family members, they have been dumping the bodies in the river. Both UP and Bihar share a long river bank of the Ganga of more than 1,400 km.

The Union home ministry is in close touch with Uttar Pradesh and Bihar governments to ensure that dumping of bodies in the Ganga is checked immediately as this could lead to further spread of the Corona pandemic in the two states.

Ministry sources said the trend of dumping bodies was being noticed largely in four districts of Kanpur, Ghazipur, Unnao and Balia from where bodies were also going further downstream to Bihar. Both states have been asked to take immediate corrective steps.

After the discovery of the dead bodies floating in the Ganga, almost all bodies were disposed of with proper religious rituals. Local police have been directed to start intensified patrolling along the river and spread awareness among the villagers not to dispose of bodies in the river as this could lead to fresh health issues.

Earlier, Bihar had also raised this issue saying that most dead bodies floating in the Ganga were coming downstream from UP and were getting piled up near Balia.

Both states have mobilised massive resources as the home ministry has cautioned them that dumping of Corona victims in the Ganga can lead to massive contamination of river water which in turn will lead to greater health issues in the coming days.

There is considerable concern among Central agencies over the spread of the Corona virus in rural areas, particularly in the populous states of UP and Bihar.