India   All India  15 May 2019  India will decide Iran oil imports after polls: Govt
India, All India

The Iranian foreign minister paid a brief visit to New Delhi on Tuesday to hold talks with Ms Swaraj. 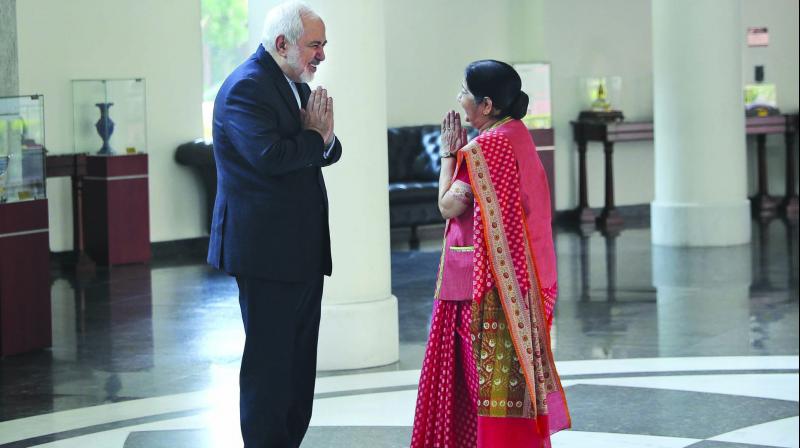 On the oil imports issue, it may be recalled that India has been in the process of totally stopping its oil imports from Iran to escape sanctions by the United States.

However, the new government that is expected to be in place within the next three weeks in New Delhi is expected to take a final decision on the matter. The Iranian foreign minister paid a brief visit to New Delhi on Tuesday to hold talks with Ms Swaraj.

The external affairs ministry issued a brief statement, saying Ms Swaraj and Mr Zarif “held constructive discussions on all bilateral issues of mutual interest” and that there was a “good exchange of views on the evolving regional situation, including Afghanistan”.

The Indo-Iranian strategic cooperation on Chabahar port was also discussed, with government sources saying “both sides expressed satisfaction at the operationalisation of the interim contract on Chabahar Port”. New Delhi has been worried over the impact that American policy against Iran will have on the Indo-Iranian strategic partnership for the development of Chabahar port in Iran that gives New Delhi crucial sea-land connectivity to Afghanistan and Central Asia, bypassing Pakistan.

It may be recalled that the United States had earlier given six-month waivers to eight countries including India, China, Japan and South Korea for exemption from the November 4 deadline last year of stopping Iranian oil imports completely. India relies heavily on foreign oil imports to meet its energy demands. The US had then set that deadline for countries across the globe to either fall in line or face US sanctions. But the US recently decided not to extend the waivers beyond the six-month period, which ended on May 2, which means any nation now importing Iranian oil will face US sanctions.

On the Iranian nuclear deal issue, Ms Swaraj told her Iranian counterpart that “India would like all parties to the agreement to continue to fulfil their commitments and all parties should engage constructively and resolve all issues peacefully and through dialogue”, government sources added.

The Iran nuclear deal, known as the Joint Comprehensive Plan of Action (JCPOA), which was inked in 2015 that had then paved the way for lifting of US sanctions on Iran. The United States— under then President Barack Obama — had pushed for the deal strongly four years ago. But with President Donald Trump announcing the US pullout last year, the US has again turned on the heat on Iran.

On Tuesday, a government source said: “The visit of the Iranian foreign minister took place at his own initiative to brief the Indian side on the Iranian approach to the recent developments in the region, including on JCPOA (Iran nuclear deal), and to review bilateral cooperation. This was part of their consultation with other countries in the region including Russia, China, Turkmenistan, and Iraq over the last few days... On the purchase of oil from Iran, EAM reiterated the position that a decision will be taken after the elections, keeping in mind our commercial considerations, energy security and economic interests.”