He said that they would take the videos to the Election Commission and authentic them on record. 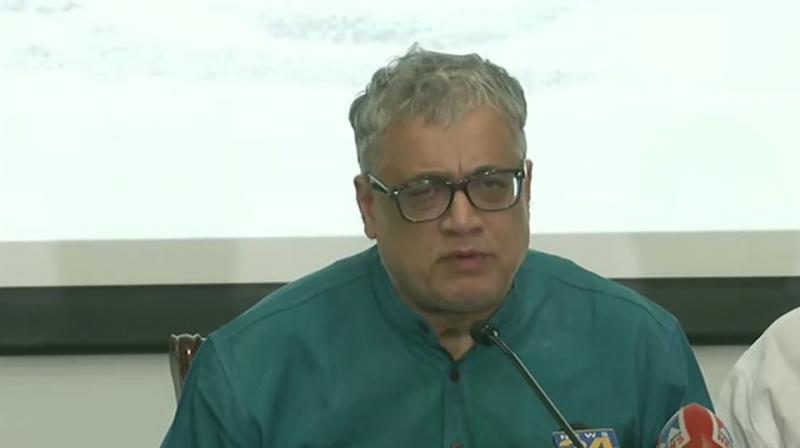 Addressing a press conference in Kolkata, Derek O’Brien said BJP is trying to justify the act and vandalism was done was hired goons. (Photo: ANI | Twitter)

Kolkata: The Trinamool Congress on Wednesday released a video to claim that "BJP goons" damaged the statue of social reformer Ishwar Chandra Vidyasagar during violence in Kolkata and said it submit them to the Election Commission.

The reaction from the TMC came close on the heels of BJP president Amit Shah accusing the West Bengal's ruling party of indulging in violence in the state and alleged that the Election Commission has been a "mute spectator". At a press conference here, TMC leader Derek O'Brien said, "The video not only clearly establishes what the BJP did, but proves that its chief Amit Shah is a liar." "The streets of Kolkata tinged with shock and anger. What happened yesterday hurt Bengali pride," he said, adding the TMC will take the videos it has to the poll panel and is authenticating them on record.

#Video #1 Evidence of what BJP goons did at Amit Shah’s road show in #Kolkata #Vidyasagar pic.twitter.com/TrQnF8KYdH

The party also showed a video and WhatsApp message asking people to come to Amit Shah's roadshow with rods and arms to fight the TMC and police. "We are trying to obtain and authenticate audio of slogans like 'Vidyasagar finished, where is the Josh' raised during the violence," O'Brien said.

He also alleged that Central forces in West Bengal have started a whisper campaign asking people to vote for the BJP. BJP and TMC supporters Tuesday fought pitched battles on the streets of Kolkata during a massive road show by Amit Shah, who escaped unhurt but was forced to cut short the jamboree and had to be escorted to safety by the police. Parts of the city plunged into a welter of violence as his convoy was attacked with stones by alleged TMC supporters from inside the hostel of Vidyasagar College, triggering a clash between supporters of the two parties.

Furious BJP supporters retaliated and were seen exchanging blows with their TMC rivals outside the college entrance. The TMC also accused Deputy Election Commissioner Sudeep Jain of giving orders to the police not to intervene in BJP issues in state.