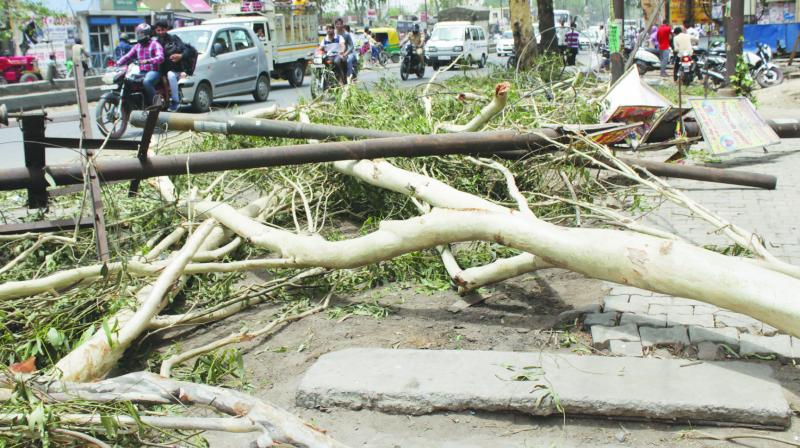 Commuters ride past fallen trees and electric poles that were uprooted after last night thunderstorm at GT road in Ghaziabad, on Monday.(Photo: PTI)

New Delhi: Heavy thunderstorm and dust storm which lashed most parts of the country on Sunday resulted in the death of 80 people with most casualties of 51 being reported from Uttar Pradesh, according to the home ministry.

In addition 14 persons died in West Bengal, 12 in Andhra Pradesh, two in Delhi while one in Uttarakhand. Similarly, 83 people were injured in Uttar Pradesh, 11 in Delhi and two in Uttarakhand.

Storm comes close on the heels of a similar weather condition which had hit several states  including UP, Rajasthan, Telangana, Uttarakhand and Punjab leaving 134 people dead.

while over 400 others injured. In the earlier storm UP was the worst affected States from where 80 deaths were reported, most of them in Agra district in the western part of the state.

Similarly, on May 9, several parts of Uttar Pradesh were struck by a severe storm that left 18 dead and 27 others injured.