India   All India  15 May 2018  Shashi Tharoor charged with ‘abetment to suicide’ four years after wife’s death
India, All India

Cong MP calls it ‘preposterous’, says will contest it ‘vigourously’. 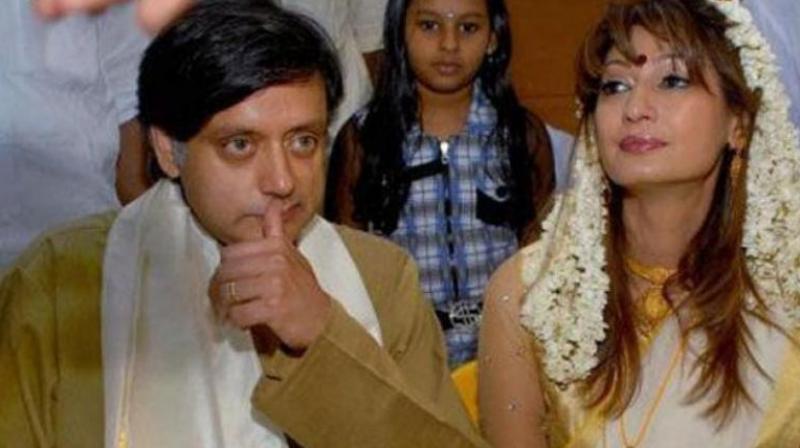 New Delhi: Four years after Sunanda Pushkar was found dead in suite number 345 of the Leela Palace Hotel in New Delhi’s Chanakyapuri, the Delhi Police on Monday accused her husband, Congress MP Shashi Tharoor, of abetting her suicide, and told a city court that his custodial interrogation was necessary as the investigation was yet to be concluded.

The police filed a nearly 3,000-page chargesheet in the court, naming Mr Tharoor as the only accused in the case and claiming there was enough evidence to proceed against him. The police also alleged that the Congress leader had subjected his wife to cruelty.

The chargesheet in the mysterious death of Sunanda Pushkar was filed before metropolitan magistrate Dharmendra Singh, who will consider it on May 24. The police also urged the court to summon Mr Tharoor, Lok Sabha MP from Thiruvananthapuram, as an accused The couple’s domestic servant Narayan Singh is one of the key witnesses in the case.

Terming the chargesheet as “preposterous”, Mr Tharoor said he intends to contest it “vigorously”. The Congress leader tweeted: “I have taken note of the filing of this preposterous chargesheet & intend to contest it vigorously. No one who knew Sunanda believes she would ever have committed suicide, let alone abetment on my part.”

He added: “It does not speak well of the methods or motivations of the Delhi  Police. In Oct 17, the law officer made a statement in the Delhi high court that they have not found anything against anyone & now in 6 months they say that I have abetted a suicide.  Unbelievable!”

Sunanda  was found dead in a luxury hotel room on the night of January 17, 2014.

Mr Tharoor has been charged under Sections 498A (husband or his relative subjecting a woman to cruelty) and 306 (abetment of suicide) of the Indian Penal Code. The chargesheet, which includes several annexures, said Sunanda died within three years, three months and 15 days of her marriage with Mr Tharoor. The couple had entered wedlock on August 22, 2010. The suite in which Sunanda’s body was found was sealed on the night of January 17, 2014 itself. The police filed an FIR against unknown persons under Section 302 of IPC (murder) on January 1, 2015. Mr Tharoor has not been arrested in the case so far as he had joined the investigation when required.

The Delhi high court had, on October 26 last year, dismissed BJP leader Subramanian Swamy’s plea for a court-monitored SIT probe into Sunanda’s  death, terming his PIL as a “textbook example of political interest litigation”. Later, Dr Swamy challenged the high court order in the Supreme Court, that asked him to satisfy the court on the question of maintainability of his petition. The special investigation team had on April 20 told the Supreme Court a draft final report has been prepared after conducting “thorough professional and scientific investigations” in the case relating to the death of the Congress MP’s wife.

The police, in its affidavit filed in the Supreme Court, had then said a draft final report had been sent to the prosecution department of the Delhi-NCT government for “legal scrutiny” and it would be filed in the trial court after being vetted.