India   All India  15 May 2018  After fractured mandate, these are the options before K'taka Governor
India, All India

After fractured mandate, these are the options before K'taka Governor

As suspense over government formation in Karnataka continues, all eyes are now set on Governor Vajubhai Vela. 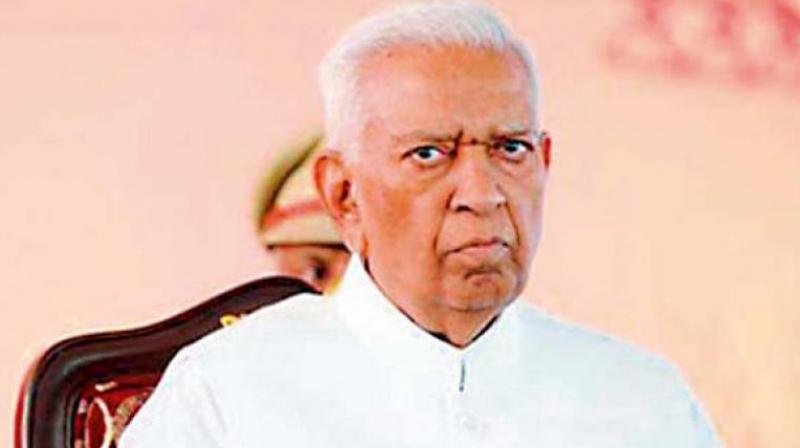 Leaders from the BJP and Congress and JD(S) met Governor Vajubhai Vela to stake claim to form government in Karntaka. (Photo: File)

Bengaluru: As suspense over government formation in Karnataka continues, all eyes are now set on Governor Vajubhai Vala.

Congress has offered support to the JD(S) to form government in the state, which the latter accepted. Congress leader Ghulam Nabi Azad along with Siddaramaiah and JD(S)’ HD Kumaraswamy met the Governor and handed him the letter stating their claim to form the government in coalition.

Meanwhile, the BJP, which fall short of halfway mark, also met the Governor and sought time to prove majority in the state assembly.

Taking a lesson from the Goa results, where Congress failed to form the government despite getting more seats, the party in Karnataka offered unconditional support to the JD(S) and agreed to allow HD Kumaraswamy to become the chief minister.

As per constitutional provision, the governor invites the single largest party, in this case the BJP, to form the government in the case of a fractured mandate.

As per the Sarkaria Commission recommendations, here are the options for the Governor in case of a fractured mandate.

1. The governor can invite an alliance of parties that was formed before the elections.

2. The governor can invite the single largest party that stakes a claim to form the government with the support of others, including independents.

3. The governor can invite a post-electoral coalition of parties, with all the partners in the coalition joining the government.

4. The governor can also invite a post-electoral alliance of parties, with some of the parties in the alliance forming a government and the remaining parties, including independents, supporting the government from outside.

These provisions were affirmed by a Constitution Bench of the Supreme Court in Rameshwar Prasad versus Union of India case in 2005.