India   All India  15 May 2018  16 dead as under construction flyover collapses in Varanasi
India, All India

16 dead as under construction flyover collapses in Varanasi 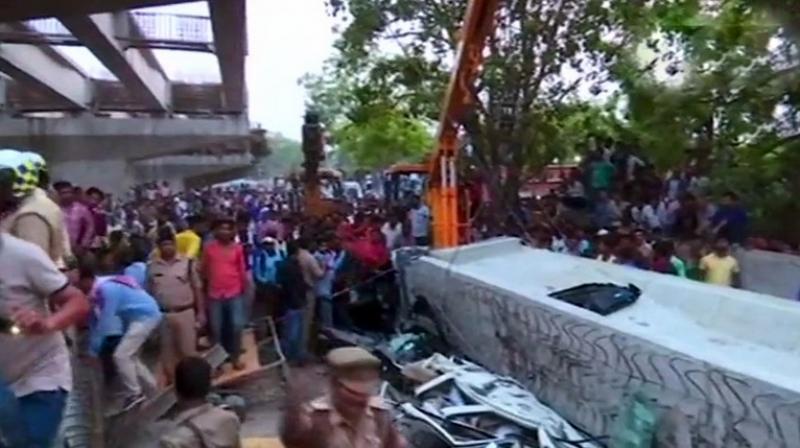 Prime Minister Narendra Modi said, 'Extremely saddened by the loss of lives due to the collapse of an under-construction flyover in Varanasi.' (Photo: ANI | Twitter)

Varanasi: At least 16 people have died after portion of an under construction flyover collapsed near Cantt railway station in Varanasi on Tuesday.

Several people were feared trapped under the debris, police said.

Several vehicles with people inside them are also reportedly trapped. Pictures from the incident site showed passengers being pulled out from a car trapped under the collapsed portion of the flyover.

The injured have been rushed to nearby hospital.

NDRF team has reached the spot to rescue people from the debris.

"Extremely saddened by the loss of lives due to the collapse of an under-construction flyover in Varanasi. I pray that the injured recover soon. Spoke to officials and asked them to ensure all possible support to those affected," Prime Minister Narendra Modi said in his tweet.

"I spoke to UP CM Yogi Adityanath Ji regarding the situation due to the collapse of an under-construction flyover in Varanasi. The UP Government is monitoring the situation very closely and is working on the ground to assist the affected," the Prime Minister added.

"I was at a distance of 50 metres from the flyover when the flyover collapsed, trapping people under it. 4 cars, an auto-rickshaw and a minibus were crushed. The help came after an hour," news agency ANI reported eye-witnesses saying.