PM has time to visit Pak not Varanasi: Priyanka Gandhi 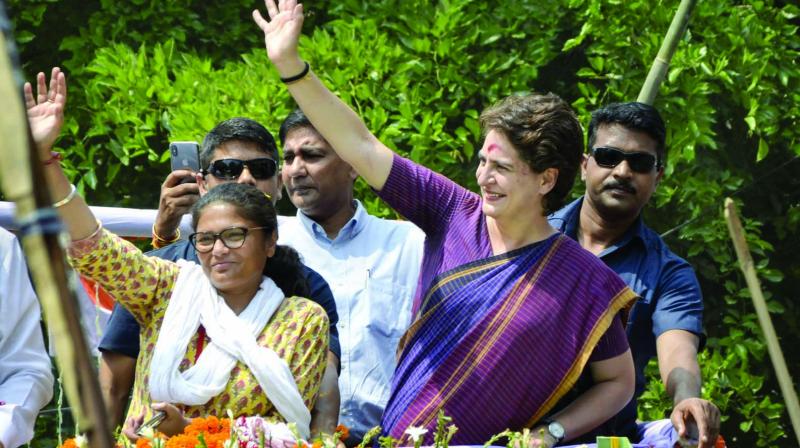 Guwahati: Congress general secretary Priyanka Gandhi who on Sunday held a roadshow in Silchar for Sushmita Dev, called up on the people to chose a new government very carefully.

Slamming the Bharatiya Janata Party (BJP)-led central government for withdrawing various special status granted to North-Eastern states, Ms Gandhi said, “No one is more sensible than the public, and you have the power to choose. You are the only ones who can decide who is a good leader and who is not.”

While addressing a gathering at the end of a roadshow, Ms Gandhi also regretted, “The strategies and intentions of the government that has been ruling for the last five years are erroneous. After coming to power BJP has removed the special status which Congress had given to the Northeast.”

“In Silchar a trade hub was going to be set up under United Progressive Alliance (UPA) government’s Look East policy but BJP dropped that too, which means its strategies and intentions are bad,” she added.

Taking a dig at the Bharatiya Janata Party, Ms Gandhi said, “BJP advertises itself so perfectly that whenever you watch television, open a newspaper or a tiffin in a train, you will see their faces.”

Taking Prime Minister head on, Ms Gandhi said, “PM Modi doesn’t have time to visit his constituency Varanasi but has time to visit America, Pakistan and several other countries.”

She also asked then people to vote for Sushmita Dev. “I came here for Sushmita. She has the kind of determination that Indira Gandhi had and she wants to work for you wholeheartedly. Sushmita is always there to speak up for you.”

Polling for Silchar Lok Sabha seat will be held in second phase on April 18.