Oppn to go to SC again, seek 50 per cent count of VVPATs

The loss of faith in the electoral procedure is raising a question mark on the country’s democratic structure, says Kapil Sibal. 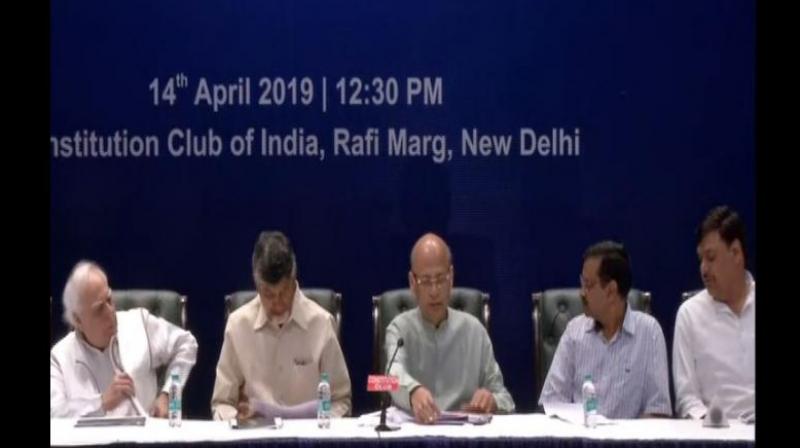 New Delhi: The Opposition parties on Sunday once again raised the issue of the alleged hacking of electronic voting machines (EVMs), and said they planned to move the Supreme Court to demand verification of at least 50 per cent of all votes by a paper trail.

Highlighting the issue of transparency in the electoral process, the parties, including the Congress, Telugu Desam Party, Samajwadi Party, CPI(M), CPI and AAP, sought protection of voters’ rights with a call to “save democracy”.

While Delhi chief minister and AAP supremo Arvind Kejriwal accused the ruling BJP of “programming” the EVMs to win the Lok Sabha elections, his Andhra Pradesh counterpart, N. Chandrababu Naidu, said 21 political parties had sought the verification of VVPAT paper trails of 50 per cent of all EVMs.

On Saturday, Mr Naidu had met chief election commissioner Sunil Arora to raise the issue of EVMs’ malfunctioning, but was rebutted by the CEC, who said the expert fielded by him had run into trouble with the commission over EVM hacking.

The Supreme Court had on Monday directed the Election Commission to increase the random matching of VVPAT slips with EVMs to five polling booths per Assembly segment, from one at present, in the Lok Sabha polls, saying it would provide greater satisfaction not just to the political parties but the entire electorate.

The Delhi chief minister claimed that people were losing faith in EVMs and election procedures. This was raising a question mark on the country’s democratic structure, he added.

Congress leader and senior lawyer Abhishek “Manu” Singhvi said the Opposition parties would approach the Supreme Court seeking a direction to the EC to count at least 50 per cent of VVPAT slips with EVMs in every Assembly segment. Mr Singhvi said the Opposition parties would carry out a nationwide campaign on the issue of discrepancies in EVMs and alleged that the EC was not doing enough to address the issue of EVMs’ malfunctioning.

Another senior lawyer and top Congress leader Kapil Sibal said: “If the EC will ignore this issue, then we will take other measures. We will not sit quietly. We will approach the Supreme Court.”

This demand by Opposition parties comes in the peak election season. The first of seven phases of the Lok Sabha polls was held on April 11, and the next one is due on April 18.

All the Opposition parties have been demanding that the votes polled through EVMs be verified with at least 50 per cent voter verifiable paper audit trail (VVPATs). A VVPAT is intended as an independent verification system for voting machines designed to allow voters to verify that their vote was recorded correctly, and will help detect any possible election fraud or malfunction of EVMs.