BJP to get thrice the seats Congress will win: Modi

Modi also hit out at the Congress for migration of Kashmiri Pandits from the Valley. 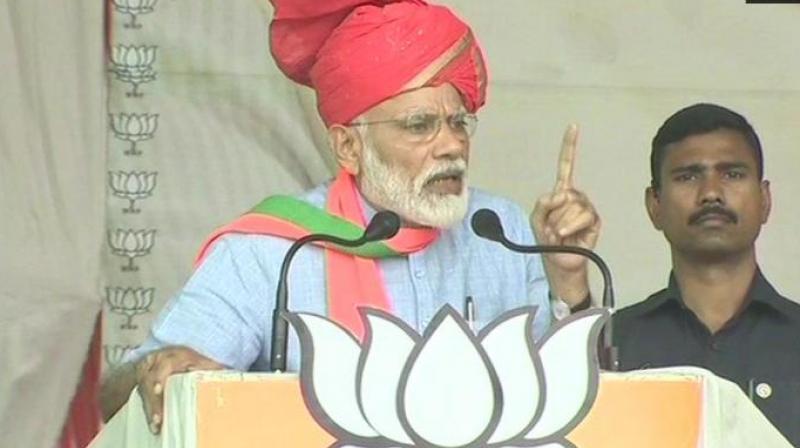 PM Narendra Modi gestures during a rally in Kathua on Sunday. (Photo: ANI)

Srinagar: Predicting a landslide victory for the ruling BJP in the ongoing Lok Sabha polls, Prime Minister Narendra Modi on Sunday said that there is a powerful wave in favour of the saffron party which is all set to win thrice the seats that Congress will get.

Addressing an election rally in Kathua in Jammu and Kashmir, Mr Modi also hit out at Congress for raising doubts on the Balakot airstrikes, its failure to prevent atrocities against Kashmiri Pandits and corruption in defence deals.

“I’ve seen a powerful wave in favour of the BJP... according to opinion polls and surveys, the BJP will get thrice the seats that Congress will win,” he said while campaigning for minister of state in PMO Jitendra Singh, who is seeking re-election from Udhampur.

Lashing out at the Congress, the Prime Minister said, “The Congress is infected with germs. The Grand Old Party’s manifesto promises that AFSPA  (Armed Forces Special Powers Act) will be removed from the state if they come to power to demoralise the security forces.”

“Can a patriot speak like this? Shouldn’t our security forces have a safety net?” he asked the people at the rally.

Looking to score over rivals on the issue of patriotism, Mr Modi accused the Congress of politicising the Jallianwala Bagh centenary event in Amritsar on Saturday and hit out at Punjab chief minister Amarinder Singh for skipping the same.

He said, “The vice-president was in Jallianwala Bagh for the event but the Congress chief minister was not there.”

Lashing out at former chief minister Omar Abdullah over his promise to get back executive posts of Sadr-e-Riyasat and Prime Minister to the state if his National Conference (NC) party is voted to power, the Prime Minister said that he will never allow the Abdullahs and the Muftis to divide India. “I will not allow Abdullahs and Muftis to divide the country.Main na jhukta hun, na bikta hun,” he said, referring to the Abdullah family and Mufti family in the state that have dominated the political scene for decades.

“The bright future of J&K can be ensured only after their departure. They can bring their entire clan into the field, can abuse Modi as much as they want but they won’t be able to divide this nation,” he said.

The Prime Minister thanked voters for coming out in large numbers for polling in Baramulla and Jammu constituencies in the first phase of the Lok Sabha elections and said, “You have given a befitting reply to terrorist leaders and opportunists.”