Abdullah was declared winner by a margin of 10,776 votes over his nearest rival and ruling PDP nominee Nazir Ahmad Khan. 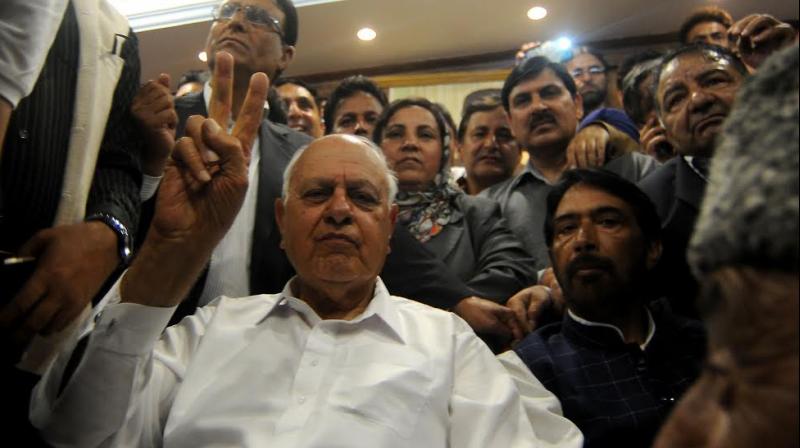 Srinagar: Opposition National Conference (NC) president and three-time chief minister Farooq Abdullah, who won the closely-watched bypoll for the Srinagar Lok Sabha seat on Saturday demanded the imposition of the governor’s rule in Jammu and Kashmir, alleging that the PDP-BJP government has “totally failed” on all fronts, particularly law and order.

Soon after being declared the winner, Mr Abdullah said that in view of the deteriorating law and order situation and growing discontent among the people against the ruling dispensation he appeals to President Pranab Mukherjee to impose governor’s rule in the state immediately.

He said, “The people of my constituency have clearly rejected People’s Democratic Party (PDP) and shown contempt to its policies and actions. The state government has totally and miserably failed to deliver. It failed to provide conducive atmosphere for the bypolls. People are suffering because of its flawed policies and actions”.

Replying to questions, he said that he would work towards securing Article 370 of the Constitution which guarantees special status to Jammu and Kashmir within the Indian Union in its original form and seek meaningful and result-oriented talks involving all stakeholders towards finding an amicable and lasting solution to the Kashmir problem. “The people of Jammu and Kashmir have suffered enormously and can’t afford more miseries, bloodshed and mayhem. The time has come to address the issue of Kashmir politically to find a solution which should be acceptable to one and all,” he said.

The NC president said, “New Delhi and Islamabad have to talk and try to honesty resolve the Kashmir issue. The people of Kashmir cannot be expected to suffer endlessly”. He added, “I will demand a dialogue between the two countries and also ask New Delhi to talk to all stakeholders in Kashmir including the Hurriyat leadership. There is no alternative to talk. You have to talk in an effort to find a solution”.

Mr Abdullah admitted that this was the “worst election” in history as it witnessed unprecedented bloodshed. “No doubt I have won but we have lost precious lives and that’s why we are not happy with this win. Yet I dedicate my victory to the people who rejected the divisive politics of PDP-BJP combine,” he said. He also said that he would in all earnestness endeavour to be the voice of the “alienated and isolated” youth of the Valley “who have been cornered, stereotyped and pushed to the wall by the politics of arrogance and polarisation”. He pledged to “voice their angst, their pain and their anguish as an elected representative.” He expressed anguish over recent videos that “expose incidents of grave human rights violations against our youth” and said strictest possible action should be taken against those troops who are found guilty.

The bypolls was necessitated by the stepping down of sitting MP of ruling PDP Tariq Hameed Karra who resigned from both the party and Parliament in protest against its forging an alliance with ideologically-divergent BJP to form government.