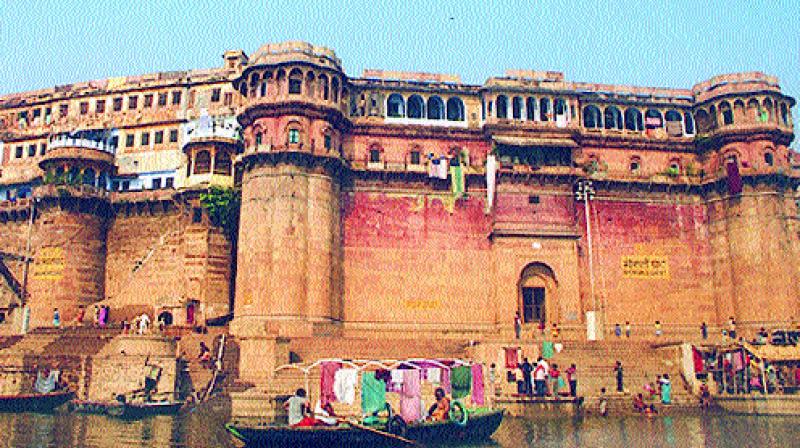 Bhonsale Ghat was repaired and renovated in 1795

New Delhi: A controversy around an alleged fraud surrounding a deal over one of the most important ghats of Varanasi, Bhonsale Ghat, built by the Nagpur-based Bhonsale family of the Maratha rulers, took a fresh turn with a Varanasi court issuing summons to the descendant of the royal family from Nagpur.

The court issued summons on the basis of a chargesheet filed by the anti-corruption unit of the Uttar Pradesh police to a member of the royal family. It also issued summons to others of a particular hotel chain near the ghat. All the charged people have been asked to appear before the court on April 30.

Bhonsale Ghat is one of the most panoramic ghats — one of the 84 ghats that have existed for hundreds of years on the bank of the river Ganga, which are integral to the existence of the holy city.

Built by the Maratha ruling family of Nagpur, Bhonsale Ghat was repaired and renovated in 1795. It has three heritage temples — Lakshminarayan Temple, Yameshwar Temple and Yamaditya Temple.

While all the 84 ghats have their own stories to tell and are also important from an archaeological point of view, many of them are in poor shape and maintenance. The local land mafia is believed to be one of the main reasons for this.

In this case (No. 3256/17), however, a member of the royal family and nine others have been chargesheeted for allegedly backing off from a deal that was already finalised, and then getting into another deal while allegedly forging the registry documents.

As per the chargesheet, a member of the royal family negotiated a deal to sell the property (CK 1/13, Patni Tola, Bhonsale Ghat) to Noida-based religious charity trust of astrology — Sixth Sense Astro Gurukul, whose chairman Arun Kumar Gupta is an astrologer. The agreement was signed on May 15, 2013, between the royal family member and Sixth Sense trust.

In furtherance of the agreement, Mr Gupta also paid Rs 1.08 crore to the owners and old tenants. The agreement was allegedly breached and the property was leased out to a hotel chain for Rs 30 lakh, and for a period of 250 years on June 25, 2014, unilaterally.

It was claimed that this was done although the agreement and possession of the property was legally with the Noida-based trust.

To cover up, they subsequently issued a notice of cancellation of the earlier agreement to Sixth Sense trust on June 26, 2014. According to the FIR, the breach of agreement amounted to “fraud with the trust”.

It came to light, however, that the member of the royal family had got a registry executed in favour of the hotel chain on June 25, 2014, itself.

Investigations by the anti-corruption unit also revealed that the accused had changed the date of the registry document by erasing the actual date and then inserting a new date — June 26, 2014 — to justify the notice sent to the trust.

Arun Gupta said the “hotel chain is adjacent to Bhonsale Ghat”. “Owners of this hotel have been trying to illegally encroach upon it for the past several years and their intention is to convert the ancient ghat into a hotel. Now, I am confident that it will not happen as the city is represented by Prime Minister Narendra Modi. The PM has already made it clear that Kashi is not just a city; it is a symbol of humanity and his (Mr Modi’s) effort is to build an Uttam Kashi,” he said.

He said he had been fighting a legal battle for over two years. “My dream is to open a world-class astrological education and research centre at Bhonsale Ghat property,” he said.

Mr Gupta alleged that he got threats during his legal battle, asking him to withdraw the case against the accused.

“Initially, even the land mafia tried to obstruct police investigation. Senior officials of the local administration and police were also hand-in-gloves with the active land mafia in the area, including hotel owners, which delayed the probe,” he alleged.

According to Mr Gupta, eventually, the case was transferred to the anti-corruption unit of the state police only after the intervention of the PMO and the governor of Uttar Pradesh, Ram Naik.

On the petition of the trust for the cancellation of “fraudulently-obtained lease deed” by the hotel owners, the civil court of Varanasi ordered to maintain a status quo.

“I was under threat from certain UP police officers who wanted me to withdraw the case and leave the property. Fearing sabotage, I approached the high court. It was on the high court’s direction that police filed the chargesheet in the case,” Mr Gupta said. The chargesheet states that all the 10 accused were involved in wrongdoing, he said. “I am still being threatened and need police protection,” Mr Gupta said.