People blocked national highway in Kathua to protest against the deadly terror attack which claimed the lives of around 40 CRPF personnel. 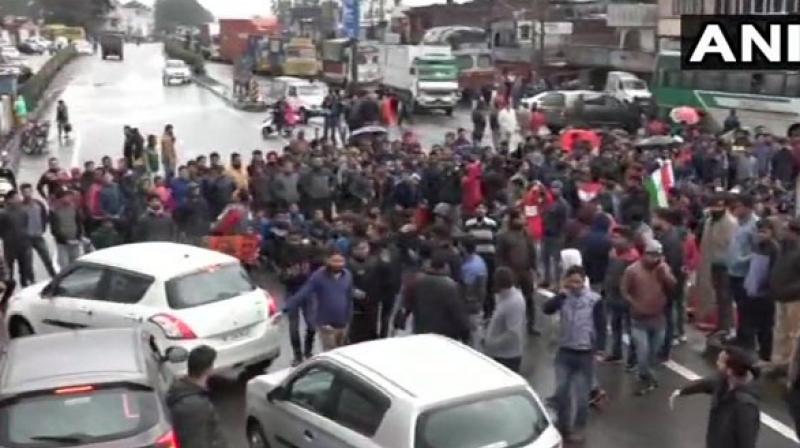 Prohibitory orders under Section 144 of CrPC have also been imposed in Jammu, while data services in various districts of the state have been suspended in the wake of protests by locals. (Source: ANI)

Kathu: Curfew has been imposed in Jammu after scores of people took to the streets and blocked the Jammu-Pathankot national highway on Friday to protest against the deadly terror attack which claimed the lives of around 40 CRPF personnel.

Prohibitory orders under Section 144 of CrPC have also been imposed in Jammu, while data services in various districts of the state have been suspended in the wake of protests by locals.

"In order to maintain law and order, public tranquillity and to protect life and property of the general public, in the exercise of the power vested in me under Section 144 CrPC, I hereby impose curfew in the Jammu city," read a letter signed by Jammu's district magistrate Ramesh Kumar.

Security has been beefed up in the state to prevent further attack.

Speaking to ANI, Udhampur Superintendent of Police Rajiv Pandey said, "Paramilitary, as well as army jawans, have been deployed to foil any other incident if any. We have increased our vigil in Jammu-Kashmir national highway, special checkpoints have been established at various parts, checking and frisking has also been increased."

While demanding a befitting reply to the terrorists, protesters raised slogans against Pakistan and militants supporters in Kashmir and widely criticized the brutal killing in the blast.

Speaking the ANI, ABVP leader Naman Dogra said, "I want to request the government to take action against Pakistan so that it does not dare to repeat its mistake."

A section of people agitating also condemned the government for not looking after the safety of the soldiers. "I want to ask the politician why there is proper security for your caravan, but not for the CRPF jawans," said a local.

In Mumbai too, locals took to streets to protest against the terror attack.

Earlier in the day, Prime Minister Narendra Modi assured that those behind the Pulwama terror attack will be “definitely punished” for the "grave mistake" committed.

The CRPF personnel were killed when their convoy was targeted on the Srinagar-Jammu National Highway on Thursday.

The convoy comprised 78 buses in which around 2500 personnel were travelling from Jammu to Srinagar.

Soon after, Jaish-e-Mohammed (JeM), which is based in Pakistan and backed by the Pakistani administration, claimed responsibility for the attack and said it was carried out by its suicide bomber.