'Our neighbours’ intentions will be given a befitting reply, all major world powers are with us,' Modi added. 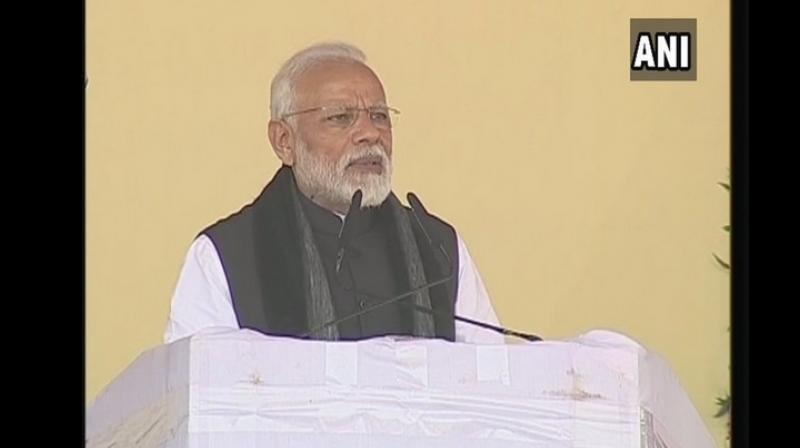 Modi said, 'We have given full authority to the security forces to decide the time, place, and nature of any further operations that need to be carried out in response to Pulwama terror attack.' (Photo: ANI)

Jhansi: Prime Minister Narendra Modi on Friday reiterated the nation’s resolve to take on terrorists decisively in Jammu and Kashmir, saying that security forces have been given full freedom to carry out anti-terror operations to retaliate Pulwama terror attack, which claimed the lives of nearly 42 CRPF jawans.

“We have given full authority to the security forces to decide the time, place, and nature of any further operations that need to be carried out in response to Pulwama terror attack,” said Prime Minister here after laying the foundation stone of several development projects in the BJP ruled state.

“Our neighbours’ intentions will be given a befitting reply by the people of India. All major world powers are with us and supporting us. The messages I have received show that they are not only sad but are also angry. Everyone is in favour of ending terrorism,” he said.

CRPF personnel were killed when their convoy was targeted on Srinagar-Jammu national highway on Thursday. The convoy comprised 78 buses in which around 2,500 personnel were travelling from Jammu to Srinagar.

Coming down heavily on Islamabad, Prime Minister Modi said: “Pakistan has been isolated and the international community has severed ties with this nation, which is faced with the worst kind of economic crisis.”

Calling for unity, Prime Minister Modi said: “The whole nation should come together to give a befitting reply to the perpetrators of the dastardly terror attack on the CRPF personnel on Thursday. The international community and the world leaders are in support of India.”

Earlier addressing a public gathering in New Delhi before flagging off Vande Bharat Express train for Varanasi from here, Prime Minister Modi said: “The blood of Indians is boiling, and the perpetrators of the Pulwama terror attack will be definitely punished with a strong reply."

He also warned that the perpetrators and those aiding and abetting terrorists have made a big mistake and will have to pay a heavy price. “We have given full freedom to the security forces. We have full faith in the bravery and valour of our security forces,” he said.

“Let me assure the nation that those behind this attack will be punished,” he said.

“I also understand the sentiments of those who are criticising us. They have full rights. It is, however, my request to all my friends that it is a very sensitive and emotional moment and the nation stands united in its fight against terror.”

“Our neighbour, which is already isolated by the global community, is in a state of illusion. If it thinks that it can demoralise India with its dastardly acts and nefarious designs, let me state categorically that it should stop day dreaming to destabilise India. This neighbour of ours which is in a state of economic despair must know that any such attempt is destined to fail and will be foiled,” he said.

“130 crore Indian will give a befitting reply to any such act or attack. Many big countries have strongly condemned this terror attack, have stood behind India and expressed support for India. The menace of terror can be contained only when the nations are united in the fight against terrorism,” he said.

India on Friday also announced the withdrawal of most favoured nation (MFN) status to Pakistan. India had granted MFN status to Pakistan in 1996, a year after the formation of the World Trade Organisation (WTO), but Pakistan never reciprocated.

“Bundelkhand has started a campaign to build a corridor for the security and development of the country. This defense corridor, from Jhansi to Agra, will empower the country as well as provide new employment opportunities to the people of Bundelkhand,” he said.

“Today, the foundation stone of a pipeline constructed at a cost of Rs 9, 000 crore has been laid in an attempt to help Bundelkhand to get rid of the water problem,” he said.