The past three recipients of the award are sound recordist Kasinathuni Viswanath (2016), Manoj Kumar (2015) and Shashi Kapoor (2014). 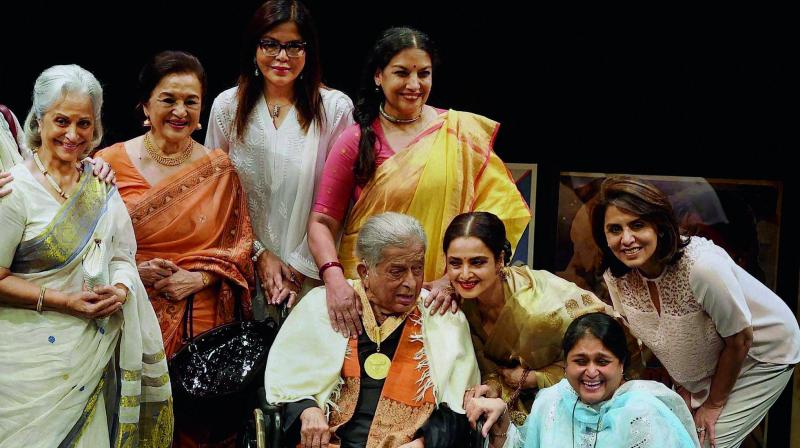 Shashi Kapoor with his leading actresses at the Dadasaheb Phalke award function.

New Delhi: In a contentious move, the Narendra Modi government is set to revamp the composition of the committee that selects the prestigious Dadasaheb Phalke Award, the nation’s highest award in cinema.

The information and broadcasting ministry is considering doing away with the laid down rule of having at least two Dadasaheb award recipients in the selection committee and replace them with so-called “eminent” persons from film, humanities or the entertainment sector.

The I&B ministry has taken a re-look at the rule that stipulates the constitution of the committee that finalises the name of the Dadasaheb Phalke awardee, and the mandatory requirement of having two past recipients of the national honour in the proposed five-member committee may be removed.

Sources said that the government has proposed that the new five-member committee, expected to be constituted soon for the selection of Dadasaheb awardee 2017, should not have two past recipients of the national award. Instead, the ministry has proposed that “the five members could be eminent persons from the film, entertainment or humanities sector.”

It is learnt that the I&B ministry has proposed these changes to the composition of the committee as it felt that most Dadasaheb Phalke Award recipients were too old to take part in the lengthy deliberations required for the finalisation of the national award.

The Dadasaheb Phalke Award is conferred on leading film personalities of the country at the National Film Awards function which is held on May 3 each year.

The recipient is honoured for her or her “outstanding contribution to the growth and development of Indian cinema”. The award comprises a Swarna Kamal medallion, a shawl and a cash prize of Rs 10 lakh.

First presented in 1969, the award was introduced by the government to commemorate Dadasaheb Phalke’s contribution to Indian cinema.

Phalke is regarded as “the father of Indian cinema” who directed India’s first full-length feature film, Raja Harishchandra, in 1913.

The past three recipients of the award are sound recordist Kasinathuni Viswanath (2016), Manoj Kumar (2015) and Shashi Kapoor (2014).