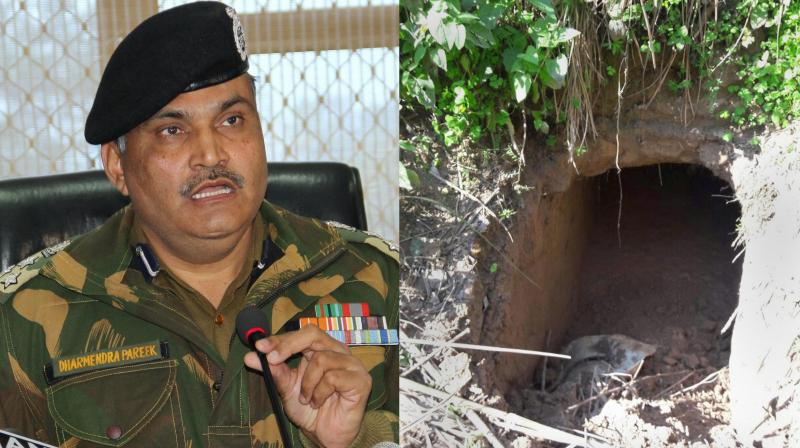 BSF DIG Dharmendera Pareek addressing the media to inform about the twenty meter tunnel dug from across the International Border detected by BSF well in advance foiling the nefarious design of Pakistani sponsored terrorists in Ramgarh sector in Jammu. (Photo: AP)

Srinagar: The Border Security Force Tuesday said it found another tunnel along the International Border in Ramgarh sector of Jammu and Kashmir’s Samba district, used by infiltrators from Pakistan.

“But with the timely detection of the tunnel which has an opening on our side, a major infiltration bid has also been foiled,” a BSF officer said.

The officer said that jawans deployed along the frontier during a routine exercise Tuesday morning came to know about a hole in the fields close to BSF’s Fatwal post.  An earth-digger was pressed into service, which led to the discovery of a 20-metre tunnel dug from Pakistan.

“This apparently was to be used by terrorists to infiltrate into India,” said another BSF officer.

He said the tunnel is 2.5-feet-wide and about that deep. It was yet to be completed and was detected well in advance before it could reach the border fence. “It was an ongoing process. It shows the terrorists are desperate to infiltrate into India and this kind of activity could not be hidden from the Pakistan authorities,” the BSF officer said.

He said a “rat hole” tunnel was used by militants on November 29 last year to sneak into India, but they were killed by the BSF. The BSF’s local commander is likely to ask for a meeting with his counterpart in Pakistan Rangers to raise the issue, sources said.