Nirbhaya case: 'Execution will not happen on Jan 22': Delhi govt to HC

However, Delhi govt and Centre said that petition against death warrant is 'premature'. 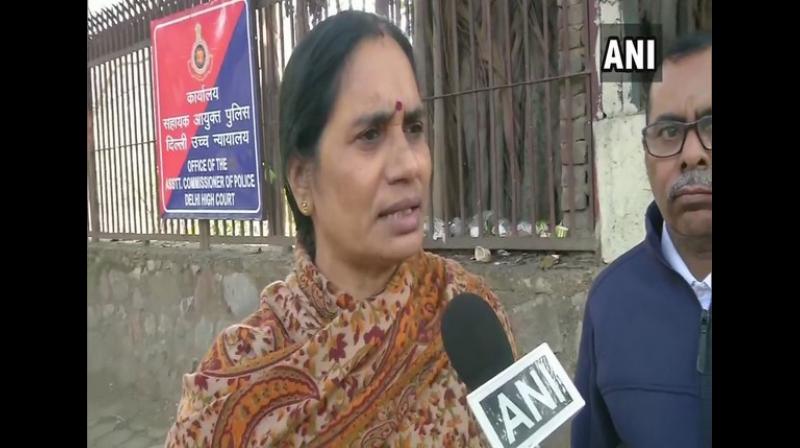 New Delhi: 'Under prison rules, have to wait for convict's mercy plea to be decided for executing death warrant,' a Delhi govt on Wednesday told HC in Nirbhaya case.

It further said execution will not happen on January 22 as mercy plea has been filed.

However, Delhi govt and Centre said that petition against death warrant is 'premature'.

Mukesh Singh, one of the four convicts in the gang-rape and murder of paramedic student in 2012, has informed the Delhi High Court that his mercy petition is pending before the Lieutenant Governor of Delhi and the President of India and he should be given a minimum 14 days notice between the rejection of his mercy petition and scheduled date of execution.

"They will be hanged on the decided date, no matter which court they approach," said Asha Devi.

The Supreme Court had already dismissed curative petitions of the two death row convicts, including Mukesh Singh, in the 2012 gang-rape case.

Vinay Sharma and Mukesh Singh had moved the curative petitions in the top court after a Delhi court issued death warrants in their names for their hanging on January 22.

Besides them, two other convicts named Pawan and Akshay are also slated to be executed on the same day at 7 am in Delhi's Tihar Jail premises.

They were convicted and sentenced to death for raping a 23-year-old woman in a moving bus in the national capital on the intervening night of December 16-17, 2012.

The victim, who was later given the name Nirbhaya, had succumbed to injuries at a hospital in Singapore where she had been airlifted for medical treatment.