Repos launches mobile pumps
India   All India  15 Jan 2020  Everyone has the right to protest: Delhi court
India, All India

Everyone has the right to protest: Delhi court

Fifteen other people arrested in the case were granted bail by the court on January 9. 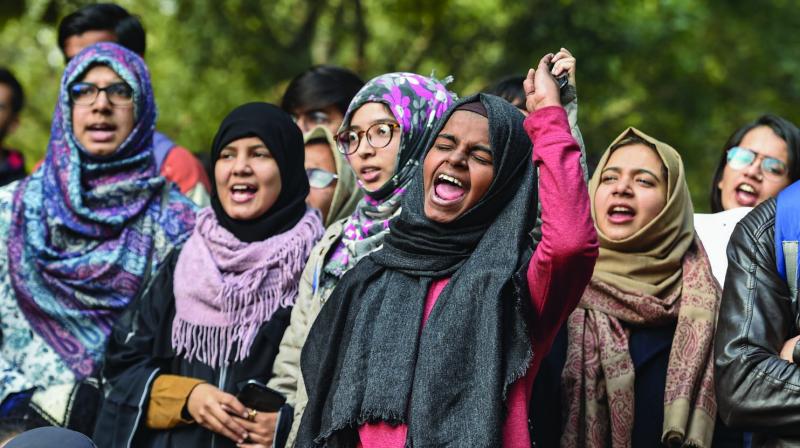 Women shout slogans during their demonstration against the CAA and NRC at Jantar Mantar in New Delhi on Tuesday. (Photo: PTI)

New Delhi: Hearing the bail petition of Bhim Army chief Chandrashekhar Azad, aka “Raavan”, arrested for his protest against the Citizenship (Amendment) Act at Jama Masjid last month, a Delhi court on Tuesday asserted that  “it is one’s constitutional right to protest” and said people were out on the streets as “inside Parliament, things which should have been said were not said”.

Additional sessions judge Kamini Lau, questioning the Delhi police on the charges listed against Mr Azad, said: “You are behaving as if Jama Masjid is Pakistan. Even if it was Pakistan, you can go there and protest. Pakistan was a part of undivided India.”

The judge’s remarks are significant in the context of the protests across the nation by college students, activists and the Opposition parties against the religion-based CAA. Mr Azad was arrested on December 21 over a dramatic protest a day before at Delhi’s iconic Jama Masjid, where he surfaced suddenly despite a heavy police presence and slipped away after being taken into custody. Fifteen other people arrested in the case were granted bail by the court on January 9.

In his bail request, Mr Azad had said the police invoked “boilerplate” charges against him and arrested him “mechanically”, without following due process of law. He also alleged he had been falsely implicated. The hearing on the bail plea will continue on
Wednesday.

On Tuesday, additional public prosecutor Pankaj Bhatia, representing the police, got off to a rough start in the Tis Hazari courtroom when he pleaded ignorance about the First Information Report (FIR) listing charges that Mr Azad faces in Uttar Pradesh. The additional sessions judge, who asked for details of these charges, expressed surprise when the prosecutor said he would “find out”.

Opposing Mr Azad’s bail application, the prosecutor said the Bhim Army chief had given inflammatory speeches at Jama Masjid to incite the gathering to carry out violent protests against the amended Citizenship Act. To this, the judge said: “Inside Parliament, things which should have been said were not said, and that is why the people are out on the streets. We have full right to express our views, but we cannot destroy our country. We cannot disintegrate it.”

When the judge asked about the evidence to prove the allegations against Mr Azad, the prosecutor referred to social media posts of the Bhim Army chief, wherein he calls people to come to Jama Masjid and sit in “dharna” (protest). At this, the judge asked, “What is the problem with going to Jama Masjid? What is wrong with ‘dharna’? It is one’s constitutional right to protest. Where is the violence? What is wrong with any of these posts? Have you read the Constitution?”

The prosecutor also referred to Mr Azad’s social media posts to argue that he had incited violence. When the prosecutor read out a post by the Bhim Army chief about going to a dharna at Jama Masjid, Ms Lau said: “Where is the violence? What is wrong with any of these posts? Who says you cannot protest? Have you read the Constitution? None of the posts were unconstitutional.”

When the prosecutor argued “permission needed to be taken” for such protests because Section 144 was in place, the court shot back: “What permission? Even the Supreme Court has said repeated use of Section 144 (prohibition of gathering of five or more persons, holding of public meetings, and carrying of firearms) is an abuse of the law...” Last week, the Supreme Court in a significant order on restrictions in Jammu and Kashmir had said that Section 144 CrPC, a British-era law that banned large gatherings, “can’t be used as a tool to suppress differences of opinion”.

When the judge asked if the police had any video or audio recordings showing objectionable content against Mr Azad, the public prosecutor replied that there was no voice recording and no video of the incident, and there were only statements of witnesses in the case. “We just have a drone CCTV footage,” the public prosecutor said.

The judge rebuked the police, saying: “Do you think the Delhi police is so backward that it has no tools to record? There must have been some recording... Give me details of the last three FIRs registered against Azad. Also show is there are any prohibition on such gathering. Show any law that prohibits this kind of gathering.”

Mr Azad’s lawyer Mehmood Pracha told the court his client was suffering from polycythemia, a blood disorder, for which he was not given proper treatment by the Tihar jail authorities till a magistrate had given directions.

Mr Paracha contended that the Bhim Army chief was deliberately put in harm’s way. “There was no ground for this arrest. He was arrested just because he had to be arrested. There is no whisper of allegation of any of the offences mentioned in the FIR, except that he had given incriminatory speeches.”

Mr Paracha said Mr Azad had shown to the world that this new law posed more problems to those belonging to the Scheduled Castes (SC) and Scheduled Tribes (ST) category, other than Muslims. He said: “Azad was actually reading the Constitution. He has said this CAA, NRC and NPR was against the SC/ST. Most of them do not have one inch of land in India. They will not be able to prove their citizenship.”

The judge observed that Mr Azad, having a law degree, can also protest inside the courts, and went on to add that he probably needs to research more on Ambedkarite philosophy. She said: “In the colonial era the protests were out on the roads. But your protest can be legal inside the courts. Azad is in the grassroots level. No one is denying that he is a lawyer and well read and probably an Ambedkarite. Ambedkar was much closer to Muslims, Sikhs and other repressed classes of society... He was a rebel of his own kind. Probably Azad has a vague idea of what he wants to say. He is not able to exactly formulate it. He may not be wrong. But he is probably not able to put it across properly. If you take up an issue, do your research. That is missing.”