India   All India  15 Jan 2018  Why has the Science Congress been postponed this year?
India, All India

Why has the Science Congress been postponed this year?

The postponement of the Science Congress being hosted by Osmania University, Hyderabad this year, is allegedly due to student protests. 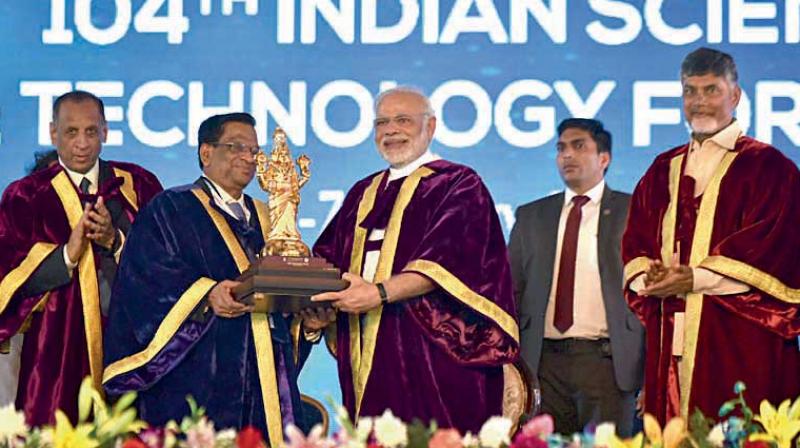 Prime Minister Narendra Modi at the inauguration of the 104th session of the Indian Science Congress in Tirupati in January 2017.

The Indian Science Congress, traditionally held in the first week of January, is the country’s oldest and biggest science conference. It has been a very important event in the Indian scheme of things because of the message that it sends out. It says at the highest level that India intends to be a scientific powerhouse and lays a great deal of importance on its scientific research and achievements. To underscore the high level of importance given to the Science Congress, it is always the Prime Minister who inaugurates the Congress and delivers the main address. This is a sort of state of the nation address for science, highlighting priority areas and policy thrusts for the country.

Attendance at the Science Congress is usually large, ranging from 25,000 to 30,000 participants. Every year, accomplished scientists from India and abroad, including Nobel laureates are invited to attend. This year some 25 Nobel laureates were expected to attend the event. More than anything else, the Science Congress is a platform for students and young scientists to get their feet wet in the world of science. There is a large section devoted to young people, including school children. They come to interact with each other, showcase their projects, present papers and listen to the greats. It can be a place to inspire young minds who have chosen to study science.

Though it is true that the standards of the Science Congress have been uneven in these last years, many complain that they are dipping. All this is likely true but the answer is not to abandon the Congress that would be the worst possible response. The answer is very obvious to lift the standards, improve quality and make it an attractive science platform again.

Last year Dr Venkatraman Ramakrishnan, who received the chemistry Nobel in 2009, was very harsh in his indictment of the Science Congress, calling it a “circus”. He swore he would never attend a Science Congress again. This was an unfortunate response from an Indian-born scientist who could have offered his criticism but then been more constructive and offered suggestions for structural changes. An Indian origin Nobel laureate has a big voice in India, he can speak to the highest level in the government and he can use his voice to push strongly for improvements that would lead to a better science climate in India.

The postponement of the Science Congress being hosted by Osmania University, Hyderabad this year, is allegedly due to student protests. The students are protesting after a post-graduate student committed suicide in the hostel. It’s a bit far-fetched to accept that this is the sole reason that the university is postponing an event as big as the Indian Science Congress. Say what you will, this does not appear to be a legitimate reason. And if it is, it speaks very poorly of both the state and central administration. There could be several ways of dealing with the student protests, including sensitive and firm negotiations. If the students appeared intractable for now, a change of venue would be the obvious solution.

A great deal of security is deployed every year for the Science Congress since the PM always attends. With this level of bandobast, shifting the venue and securing it would certainly not be a difficult task for the security forces. So is there another reason the Congress is being postponed, and that too indefinitely? Could it be due to the overlap of the Winter Session of Parliament with the dates of the Science Congress? Senior scientists and administrators have hinted that this might be the case.

Now let’s see how this has played out. The government delayed the Winter Session of Parliament because Gujarat (and incidentally Himachal Pradesh too but this was really incidental) was going to polls. This should not have been a reason in itself for postponing the Parliament session. But it did because as it turned out, the PM and large chunks of his Cabinet were parked in Gujarat for long periods of campaigning. Under these circumstances, the PM was unavailable to attend the Science Congress and the Science Congress cannot be held without the PM, so it was shelved.

This has send very wrong signals and scientists are deeply unhappy at this development. There is the acute embarrassment of having to tell scientists and Nobel laureates from across the world that the Science Congress has been called off at the last minute. These are busy people with packed schedules who had blocked dates way ahead for this meeting, had bought their tickets and made other travel arrangements and now had to cancel everything. Apart from highlighting the inefficiency of the government, what signal does this send out about the place that India gives to its scientific developments even as it professes its ambition to be a knowledge hub driving a knowledge-based economy to be among the top 10?