4 senior judges have taken up their respective business on the first working day of the SC after the Jan 12 press meet. 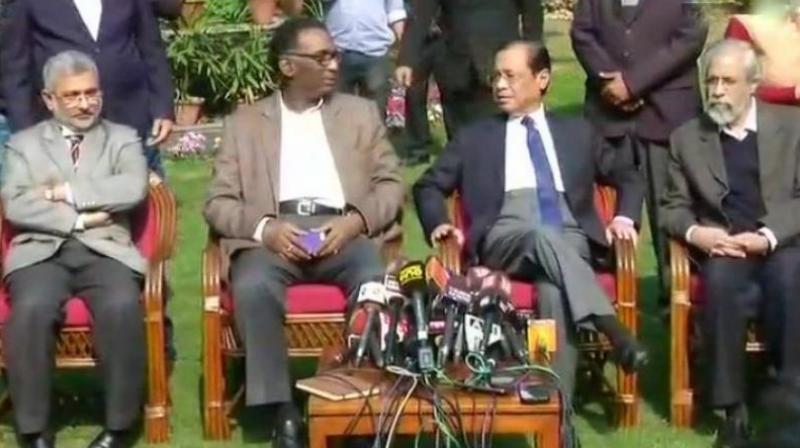 On Friday, the 4 senior SC judges stunned the country as they held a press conference at the house of Justice Chelameswar, who is the most senior judge in the country after Justice Misra, and declared that the administration of the Supreme Court 'is not in order'. (Photo: ANI)

New Delhi: Four top Supreme Court judges on Monday resumed work like always, belying the simmering tensions sparked by their accusations against the Chief Justice, while the Attorney General described the unprecedented crisis as "a storm in a tea cup".

The four judges -- Justices J Chelameswar, Ranjan Gogoi, Madan B Lokur and Kurian Joseph -- took up their respective business on the first working day of the top court after the January 12 press conference.

Attorney General KK Venugopal said the issue has been settled.

"Now everything has been settled. The courts are functioning. It was a storm in a tea cup," Venugopal told NDTV.

According to reports Chief Justice of India (CJI) Dipak Misra "smiled but didn't answer" at the Supreme Court on Monday morning when the rebellion of the four senior most judges after him was raised in his courtroom.

Sources to NDTV speculated that the feud was openly discussed, but it is not confirmed.

During a press conference on Friday, the four judges had flagged certain problems, including the assigning of cases in the apex court, and said there were certain issues afflicting the country's highest court.

On Sunday, Chief Justice of India (CJI) Dipak Misra had met a seven-member delegation of the Bar Council of India and Supreme Court Bar Association President Vikas Singh and had assured them that the crisis would be sorted out soon and congeniality would prevail.

The CJI is yet to reach out to Justices Chelameswar, Ranjan Gogoi, Madan Lokur and Kurien Joseph, who took him on in an extraordinary press conference on Friday.

On Sunday, senior lawyers of the apex court who met the CJI said he had said he "would ensure there was congeniality in the top court at the earliest".

Vikas Singh, the president of the Supreme Court Bar Association, handed over a resolution to Justice Misra, which appeared to support the four judges and said all public interest litigation should be taken up by senior judges.

The four senior SC judges stunned the country as they held a press conference at the house of Justice Chelameswar, who is the most senior judge in the country after Justice Misra, and declared that the administration of the Supreme Court "is not in order".

The judges spoke out against the allocation of sensitive cases to junior judges and said without an independent judiciary, "democracy wouldn't survive".

Stating that it was "with no pleasure" that they had gone to the media, the judges said they were making their disagreement with the Chief Justice public after private talks failed to address what they said were serious problems.

Among the cases that they had taken up with the CJI over allocation to a junior judge was that of judge BH Loya's death in 2014, months after he took over a case in which BJP president Amit Shah was an accused.