With the distance between these two leaders and their party cadres increasing, it is the BJP that is in an upbeat mood. 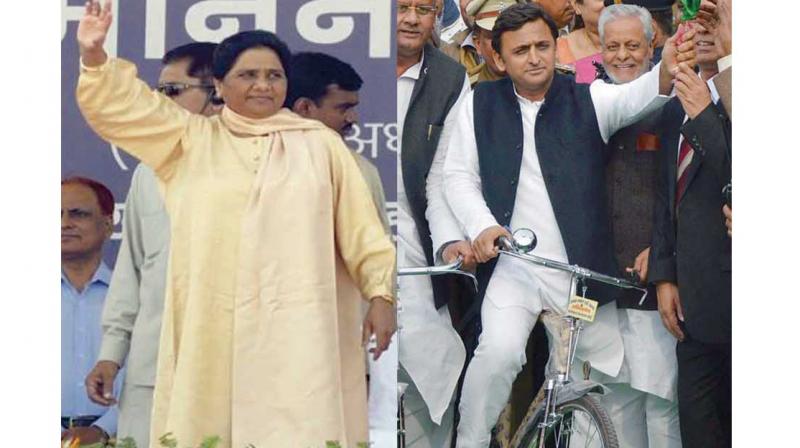 BSP supremo Mayawati (left) at a rally and Samajwadi Party president rides a bicycle, the party’s election symbol, during an election campaign.

With the distance between the two Opposition leaders and their party cadres increasing, it is the BJP that is in an upbeat mood due to the absence of a formidable rival.

Lucknow: Samajwadi president Akhilesh Yadav and Bahujan Samaj Party president Mayawati rarely see eye to eye on various issues and even indulge in political one-upmanship from time to time. However, both the leaders have something in common — inability to meet party workers and hit the street and lead agitations from the front in situations where the ruling BJP can be confronted and embarrassed.

With the distance between these two leaders and their party cadres increasing, it is the BJP that is in an upbeat mood.

A senior BJP minister remarked, “SP and BSP should first settle issues in their own parties before they even think of taking us on. Leaders who treat politics like a 9 to 5 job with vacations thrown in, can never get support from their cadres.”

Ms Mayawati is unpopular for her reclusive behaviour. Party cadres allege she rarely meets workers, never responds to requests from leaders and reaches out to party cadres only through a defined set of leaders.

She avoids visiting homes of her party workers to join them on occasions of celebrations or death of family members.

For a common party workers it is almost impossible to meet the BSP president, a cause for growing frustration among foot soldiers of the party.

Former BSP leader Swami Prasad Maurya, who is now a minister in the Yogi Adityanath government, said, “Her inaccessibility has led to the downfall of the BSP.”

“Ms Mayawati claims to be a leader of dalits but can any dalit ever claim to have access to her? She remains locked in her ivory tower and her inner coterie keeps her under the illusion that all is well outside,” says the former BSP leader.

SP president Akhilesh Yadav, who seemed like the brightest star on Uttar Pradesh’s political horizon till some time back, also seems to be falling into the same trap as Mayawati by remaining aloof and avoiding ground-level workers.

According to sources in his party, Akhilesh Yadav is not interested in visiting places where major incidents of crime take place to corner the Yogi government over the poor law and order situation.

In such a situation, he prefers to send a delegation of party leaders and seeks a report, they said.

Party workers complain that their young president is turning reclusive with every passing day.

“You can no longer meet him without an appointment. The people who surround him make sure that he remains unavailable most of the time. This is my third visit to Lucknow from Kannauj and I have not been able to meet him. I am disappointed because as a young leader, I expected him to be easily accessible to workers”, said a senior party functionary.

A former SP MLA said, “It is surprising because Akhilesh Yadav is young and energetic and we expect him to work at the ground level but he is turning into a ‘drawing room’ politician.”

Incidentally, Akhilesh Yadav has not led any agitation in the state and was conspicuously missing from the party’s campaign for the recent municipal polls - a fact that has rankled the party cadres.

Unlike the SP chief, his father Mulayam Singh Yadav still makes it a point to meet party workers who visit him and also attends functions to which he is invited. Both Ms Mayawati and Akhilesh Yadav also do not reach out to other political leaders directly but prefer to communicate through their aides, something that puts off most leaders.