Rahul asked party workers to tell people about the work done by the Congress and what had been done by the Modi government. 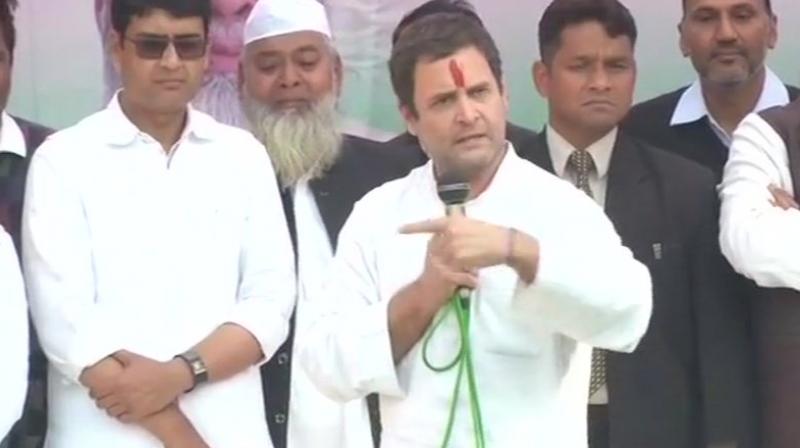 Rahul Gandhi addressed a public meeting at Salon, which is located in Rae Bareli district but falls in his Lok Sabha constituency, Amethi. (Photo: ANI)

Rae Bareli: On his first visit as Congress president to party bastions Rae Bareli and Amethi in Uttar Pradesh, Rahul Gandhi on Monday slammed the BJP, accusing it of continuously "lying" and not honouring its promises made to the people.

He was addressing a public meeting at Salon, which is located in Rae Bareli district but falls in his Lok Sabha constituency, Amethi.

"The BJP people are continuously lying...one lie after the other. Whether it is pertaining to the Rs 15 lakh in the bank accounts of people or giving a remunerative price to the farmers or construction of roads...," the Gandhi scion said.

In the run-up to the 2014 Lok Sabha election, the BJP had promised that it would deposit Rs 15 lakh in the bank account of every citizen if it came to power.

Stating that lakhs of youngsters were jobless in the country, Rahul Gandhi said Prime Minister Narendra Modi never uttered a word about them.

He asked the Congress workers to "expose the lies" being propagated by the BJP.

"It is your responsibility to tell the public about the lies being said by the BJP. Also tell the people of Amethi about the various development works done by us. Whether it is related to the highways, the rail line network, the food park, the IIIT or the petroleum institute," the Congress chief said.

He also asked the party workers to tell the people about the work done by the Congress and what had been done by the Modi government.

Referring to Gujarat, Rahul Gandhi claimed that there were 30 lakh unemployed youth in the BJP-ruled state.

"They are demanding employment, but Modi is not saying anything (about it)," he said.

"However, I want to say one thing. Come what may, the food park will be set up here (in Amethi) and I will prove this...As soon as our government is formed, whether it is the sugarcane farmers, potato farmers or farmers who grow other crops, your produce will be sold here and you will get a handsome price," he added.

After the meeting, as the Congress president's convoy was leaving the venue, some BJP workers raised slogans against him. A commotion ensued between the workers of the saffron party and Congress and the police had to intervene.

In the melee, Congress MLC from Rae Bareli Deepak Singh was seen engaged in a verbal exchange with Additional Superintendent of Police Shekhar Singh.