Netanyahu will meet the PM and hold delegation level talks around 12 noon and is scheduled to issue a joint press statement at 1 pm. 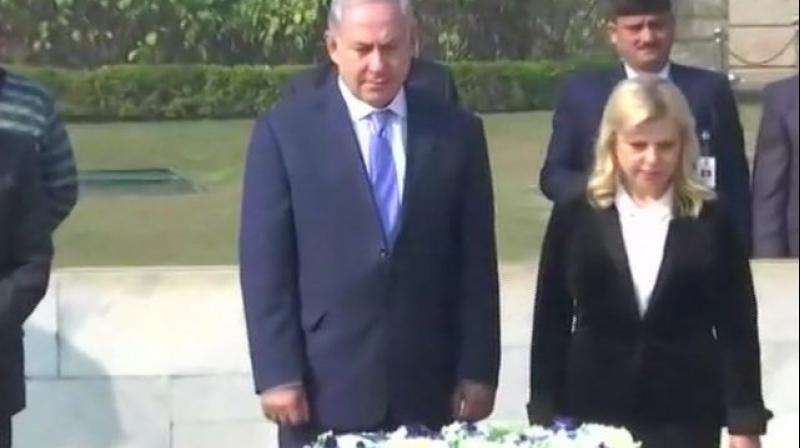 After getting a ceremonial reception at the Rashtrapati Bhavan, Netanyahu and his wife moved to Rajghat, where they paid tributes to Mahatma Gandhi. (Photo: ANI/Twitter)

New Delhi: Israeli Prime Minister Benjamin Netanyahu has been given a ceremonial reception at the Rashtrapati Bhavan on Monday.

Addressing the media, Netanyahu said: "This is the dawn of a new era in the friendship between India and Israel. PM Modi set the ball rolling with his historic visit to Israel, which created tremendous enthusiasm and it continues with my visit here (India). Our visit to India has been deeply moving for my wife, me and the entire people of Israel. I think it heralds a flourishing partnership to bring prosperity, peace and progress for both our people."

The Israeli prime minister and his wife Sara Netanyahu then left for Rajghat where they paid tributes to Mahatma Gandhi.

Netanyahu will meet Prime Minister Narendra Modi and hold delegation level talks around 12 noon. The two sides will sign agreements and is scheduled to issue a joint press statement at 1 pm.

The Israeli Prime Minister will, around 6 pm on Monday, call on President Ram Nath Kovind.

On Sunday, Prime Minister Narendra Modi set aside protocol to receive his Israeli counterpart Benjamin Netanyahu, who arrived in New Delhi for a historic six-day visit.

Modi welcomed Netanyahu with a hug upon his arrival. According to Israeli officials, Netanyahu was pleasantly surprised by Modi welcoming him at the airport. "I very much appreciate the gesture," Netanyahu was quoted as saying by officials.

Dubbing India-Israel relationship as a “marriage made in heaven”, Israeli Prime Minister Benjamin Netanyahu on Sunday said that even though the Jewish state was “disappointed” by India's vote at the UN against the Jerusalem issue, one negative vote will not affect the ties.

Netanyahu said he hoped that his visit to India will strengthen cooperation between the two countries in various areas like technology, agriculture and other spheres that are changing the world.