Modi is a revolutionary leader, catapulting India into future: Netanyahu

9 MoUs were signed between India and Israel including plans on scaling up the Centers of Excellence on agricultural cooperation. 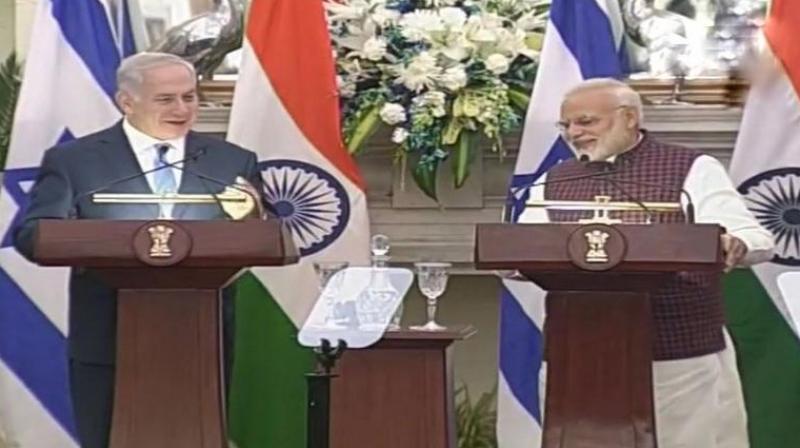 Recalling the horrors of 26/11 Mumbai terror attack Israeli PM Netanyahu said: 'We remember the horrific savagery in Mumbai (26/11 attacks), we will never give in and will fight back.' (Photo: ANI/Twitter)

Issuing a joint press statement after the signing of pacts, Prime Minister Narendra Modi welcomed his Israeli counterpart to India. "My good friend welcome to India, your visit marks a special beginning to our new year calendar," Modi said.

Modi added: "Today and yesterday we reviewed progress in our relations and renewed our relations on the opportunities that beckon us."

Modi said, "We have imparted our shared impatience to the implementation of our earlier decisions. The results are already visible on the ground. Our discussions today were marked by convergence to accelerate our engagement and to scale up our partnership."

Recalling his visit to Israel in 2017, Prime Minister Narendra Modi said: "Last year in July, I carried the greetings and friendship of 1.25 billion Indians during my momentous journey to Israel. In return, I was overwhelmed by the generous affection and warmth of the Israeli people led by my friend Bibi (Benjamin Netanyahu)."

Modi said that both India and Israel will strengthen existing pillars of cooperation in areas that touch the lives of people of both the countries.

Modi said: "We (Modi and Netanyahu) exchanged views on scaling up the Centers of Excellence that have been a main-stay of agricultural cooperation."

Prime Minister Narendra Modi said in Defence, he has invited Israeli companies to take advantage of the liberalised FDI (foreign direct investment) regime to make more in India with the Indian companies.

The visiting prime minister Benjamin Netanyahu praised his Indian counterpart Narendra Modi and said: "You are a revolutionary leader, you have revolutionised India and catapulting this state to the future, your visit to Israel was groundbreaking as it was the first time an Indian leader visited."

Netanyahu said Jews in India have never witnessed anti-semitism like in some other countries, "this is a tribute to India's great civilisation, tolerance and democracy."

Recalling the horrors of 26/11 Mumbai terror attack Israeli PM Netanyahu said: "We remember the horrific savagery in Mumbai (26/11 attacks), we will never give in and will fight back."

Remembering Modi's visit to Israel, the visiting PM said: "It (Modi's Israel visit) excited all Israelis and of course many Israelis of Indian descent and origin came. Well I thought I was in a rock concert. But it was a historic event."