Gujarat told the Supreme Court it had received 22,557 applications as of Thursday from families of the dead seeking compensation 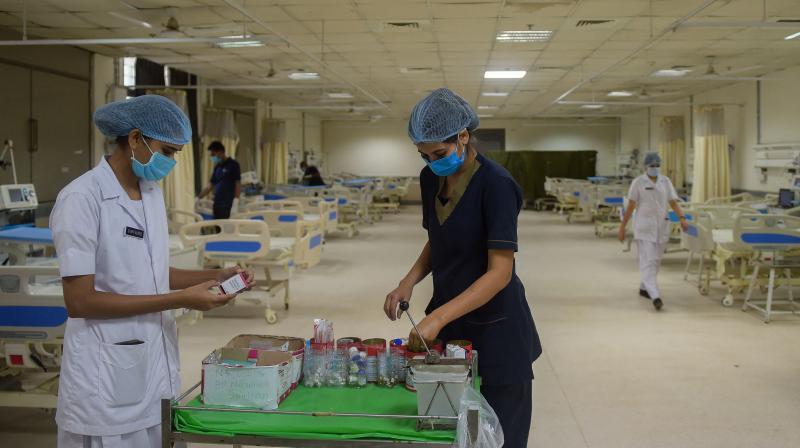 Medical workers checks medicine and other essential items inside a Covid-19 coronavirus ward of a Civil hospital in Ahmedabad. (SAM PANTHAKY / AFP)

AHMEDABAD: Gujarat has acknowledged more COVID-19 deaths than its official tally, according to a court document filed on Monday, lending weight to fears that the country's actual toll was much higher than reported.

Reuters and other media have reported, based on figures collected from crematoriums and cemeteries, that during India's record second wave of cases between April and June, states including Gujarat undercounted deaths as many people died at home due to a severe shortage of hospital beds and oxygen.

Gujarat, Prime Minister Narendra Modi's home state, told the Supreme Court it had received 22,557 applications as of Thursday from families of the dead seeking compensation and 16,175 had been approved, according to an affidavit seen by Reuters.

Its reported death count is 10,099, according to the state's latest health bulletin.

A Gujarat official with direct knowledge of the matter said applications had now swelled to more than 40,000 and nearly half had been approved. All of them would get 50,000 rupees ($659) each.

India has reported a total of 475,636 COVID-19 deaths, including many revised figures from states that have come under pressure from courts to accurately represent the scale of the disaster.

The main opposition Congress party said it believed the actual death toll to be still higher.

"We have been saying from the beginning that the Gujarat government has been underreporting COVID-19 cases and deaths," said Manish Doshi, chief spokesperson of Gujarat Congress, adding its surveys had shown at least 55,000 deaths.

Gujarat Revenue Minister Rajendra Trivedi, whose department is paying the compensation, did not respond to requests for comment.