The agitated students were sloganeering against PM Modi led Central government and demanded that the Act should not be implemented. 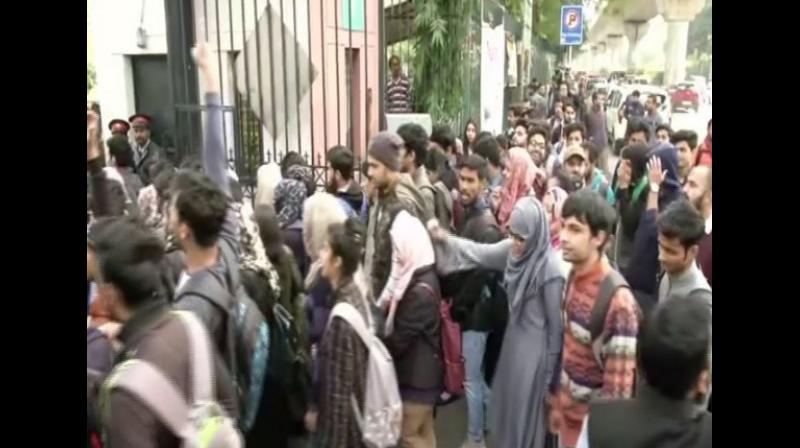 New Delhi: The Jamia Millia Islamia on Saturday declared vacation till January 5 and cancelled all exams in view of the tense situation in the university due to students' protest against the amended citizenship act.

"All exams postponed. New dates to be announced in due course of time. Vacation declared from December 16 to January 5. University will reopen on January 6, 2020," a senior university official said.

Scores of students from Jamia Millia Islamia (JMI) University staged a protest against the Citizenship (Amendment) Act 2019 on Saturday in New Delhi.

The agitated students were heard sloganeering against Prime Minister Narendra Modi led Central government and demanded that the Act which has been passed and notified earlier this week, should not be implemented.

"We had scheduled our classes but there is no attendance. The students studying in this University feel that this Act will be discriminatory against them. We cannot help it. The protesters want the government to rethink on that," said Naseem Ahmad Khan, Exam Controller.

The university turned into a virtual battlefield on Friday when students and policemen clashed with each other as students tried to march to Parliament in protest against the legislation.

The Citizenship (Amendment) Act, 2019, seeks to grant Indian citizenship to refugees from Hindu, Christian, Sikh, Buddhist and Zoroastrian communities fleeing religious persecution from Pakistan, Afghanistan, and Bangladesh and who entered India on or before December 31, 2014.