Jharkhand has a 81-member Assembly and 42 is the halfway mark needed to form government. 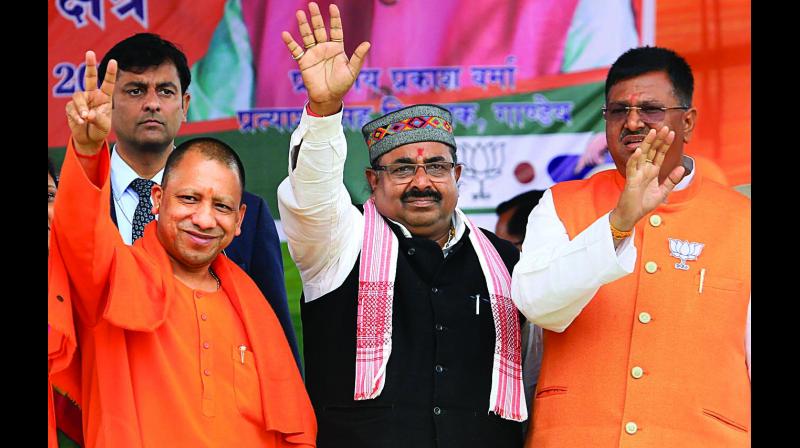 UP CM Yogi Adityanath waves at supporters during an election rally in Giridih district on Friday. (Photo: PTI)

Ranchi: Even before the final two rounds of polling for the Jharkhand Assembly elections are over, the cobweb of coalition politics have started moving here with permutations and combinations being worked out by both the ruling BJP and Oppos-ition JMM-Congress.

While the final arithmetic would take shape only on the result day on December 23, speculation is rife on possible scenarios in case of a hung Assembly.

Jharkhand has a 81-member Assembly and 42 is the halfway mark needed to form government.

The one party which both the BJP and Congress, which is in alliance with the JMM, are hopeful of bailing them out is the Sudesh Mahato-led All Jhark-hand Students Union, which is a former ally of the BJP, but fought independently in these polls.

While local BJP leaders hope that in case the party falls short of the majority mark, the AJSU would help prop up an NDA government, the Congress-JMM coalition has also kept open its options to rope in the regional party in case it is a wee bit short of the magic number.

However, the AJSU is playing its cards close to its chest. Officially, Mr Mahato told this newspaper that any option can be explored only after the actual results are out.

Sources in his party though feel that Mr Mahato was unlikely to support a BJP government led by current chief minister Raghu-bar Das and would, this time, go for the kill seeking to become the CM himself with any party’s support, if he got the correct numbers. The AJSU has fielded candidates in 53 of the 81 Assembly seats in the state.

In the Congress camp too, leaders feel that the AJSU option can be explored if the alliance came close and fell short of a few seats.

“The problem in this case would only be the fact that JMM chief and former chief minister Hemant Soren and Sudesh Mahato are both tribal leaders and might not want to share space and the vote bank,” a senior leader of the Jha-rkhand Congress stated.

“Our first choice would be the Jharkhand Vikas Morcha led by Babulal Marandi. But nothing can be ruled out post results,” he continued.

There is also a deep distrust between the Congress and the JMM with a section of the Congress state leadership apprehensive that the regional party might take help from the BJP to form the government if the BJP agreed to make Mr Soren, the chief minister.

“Though this is a remote possibility, nothing can be ruled out, as according to our calculations, AJSU would not be able to get as many numbers required to become the kingmaker. In such a scenario, the BJP might turn to JMM to keep the Congress out of power,” said a Congress leader, who was spearheading the alliance campaign in the Santhal belt which goes to polls on December 16.

It might be remembered that the JMM-Congress-RJD coalition has already announced Mr Soren as its chief ministerial candidate.

In the end though, a Maharashtra style coalition of all parties, just to keep the BJP out, can also not be ruled out, sources said.